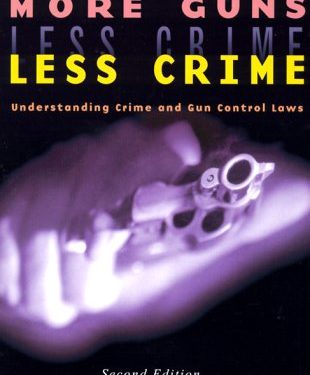 Some of you may remember the masterpiece of research and presentation on the matter of guns against the insanity of those who want to take away the rights of law-abiding citizens to be able to defend themselves and their families against unjust aggressors. The book is titled More Guns, Less Crime, by John Lott, Jr., first published in 1998. It is now in its third edition.

Here is just another among hundreds of cases we could examine that demonstrate how guns can be instruments that save the lives of the innocent. When two armed men attempted a home invasion robbery of a home in Ladson, South Carolina, where a 13 year-old boy was home alone, thank God he was able to quickly acquire his mother’s  legally-purchased pistol to defend himself.

To make a long story short, a gun fight ensued leaving one of the invading felons dead, and the other eventually in custody. The boy was uninjured. See the full story here:

Love toward oneself remains a fundamental principle of morality. Therefore it is legitimate to insist on respect for one’s own right to life. Someone who defends his life is not guilty of murder even if he is forced to deal his aggressor a lethal blow…

[2265] Legitimate defense can be not only a right but a grave duty for one who is responsible for the lives of others. The defense of  the common good requires that an unjust aggressor be rendered unable to cause harm.

It is unthinkable to me how anyone, much less a Christian, could really believe the government should disarm its citizenry.

Some will say at this point that there is a legitimate tradition of pacifism in the Church. And there is. If you want to read an article I wrote about that, click here. So if someone wants to be a pacifist that is one thing. But to force others, even a father like me, who has the responsibility to protect my wife and seven children, to disarm so that he, or I, cannot protect my family, is unconscionable. In the end, the only thing gun control accomplishes is the rendering of law-abiding citizens defenseless against armed aggressors.

Thank God this 13 year-old boy had recourse to what became the ultimate equalizer in this battle of and for his life!

Don’t anyone dare to try and take my guns away from me and my family! Not gonna’ happen, folks!

On “At Home With Jim and Joy”