Purgatory is in the Bible 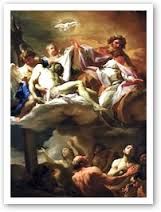 This may well be the most common single question I receive concerning our Catholic Faith whether it be at conferences, via email, snail mail, or any other venue. In fact, I’ve answered it twice today already, so I thought I might just blog about it.

We’ll begin by making clear just what we mean by “Purgatory.” The Catechism of the Catholic Church teaches:

All who die in God’s grace, but still imperfectly purified, are indeed assured of their eternal salvation; but after death they undergo purification, so as to achieve the holiness necessary to enter the joy of heaven (1030).

This seems so simple. Its common sense. Scripture is very clear when it says, “But nothing unclean shall enter [heaven]” (Rev. 21:27). Hab. 1:13 says, “You [God]… are of purer eyes than to behold evil and cannot look on wrong…” How many of us will be perfectly sanctified at the time of our deaths? I dare say most of us will be in need of further purification in order to enter the gates of heaven after we die, if, please God, we die in a state of grace.

In light of this, the truth about Purgatory is almost self-evident to Catholics. However, to many Protestants this is one of the most repugnant of all Catholic teachings. It represents “a medieval invention nowhere to be found in the Bible.” It’s often called “a denial of the sufficiency of Christ’s sacrifice.” It is said to represent “a second-chance theology that is abominable.” And most often the inquiries come from Catholics who are asking for help to explain Purgatory to a friend, family member, or co-worker.

A Very Good Place to Start

Perhaps the best place to start is with the most overt reference to a “Purgatory” of sorts in the Old Testament. I say a “Purgatory of sorts” because Purgatory is a teaching fully revealed in the New Testament and defined by the Catholic Church. The Old Testament people of God would not have called it “Purgatory,” but they did clearly believe that the sins of the dead could be atoned for by the living as I will now prove. This is a constitutive element of what Catholics call “Purgatory.”

In II Maccabees 12:39-46, we discover Judas Maccabeus and members of his Jewish military forces collecting the bodies of some fallen comrades who had been killed in battle. When they discovered these men were carrying “sacred tokens of the idols of Jamnia, which the law forbids the Jews to wear” (vs. 40), Judas and his companions discerned they had died as a punishment for sin. Therefore, Judas and his men,

“… turned to prayer beseeching that the sin which had been committed might be wholly blotted out… He also took up a collection… and sent it to Jerusalem to provide for a sin offering. In doing this he acted very well and honorably… Therefore he made atonement for the dead, that they might be delivered from their sin.”

There are usually two immediate objections to the use of this text when talking with Protestants. First, they will dismiss any evidence presented in II Maccabees because they do not accept its inspiration. And second, they will claim these men in Maccabees committed the sin of idolatry, which would be a mortal sin in Catholic theology. According to the Catholic Church, they would be in Hell where there is no possibility of atonement. Thus, and ironically so, they will say, Purgatory must be eliminated as a possible interpretation of this text if you’re Catholic.

Rejecting the inspiration and canonicity of II Maccabees does not negate its historical value. Maccabees aids us in knowing, purely from an historical perspective at the very least, the Jews believed in praying and making atonement for the dead shortly before the advent of Christ. This is the faith in which Jesus and the apostles were raised. And it is in this context Jesus declares in the New Testament:

And whoever says a word against the Son of man will be forgiven; but whoever speaks against the Holy Spirit will not be forgiven, either in this age or in the age to come (Matthew 12:32, emphasis added).

This declaration of our Lord implies there are at least some sins that can be forgiven in the next life to a people who already believed it. If Jesus wanted to condemn this teaching commonly taught in Israel, he was not doing a very good job of it according to St. Matthew’s Gospel.

The next objection presents a more complex problem. The punishment for mortal sin is, in fact, definitive self-exclusion from communion with God and the blessed (the definition of Hell)  according to Catholic teaching (see CCC 1030). But it is a non-sequitur to conclude from this teaching that II Maccabees could not be referring to a type of Purgatory.

First of all, a careful reading of the text reveals the sin of these men to be carrying small amulets “or sacred tokens of the idols of Jamnia” under their tunics as they were going in to battle. This would be closer to a Christian baseball player believing there is some kind of power in his performing superstitious rituals before going to bat than it would be to the mortal sin of idolatry. This was, most likely, a venial sin for them. But even if what they did would have been objectively grave matter, good Jews in ancient times—just like good Catholics today—believed they should always pray for the souls of those who have died “for thou [O Lord], thou only knowest the hearts of the children of men” (II Chr. 6:30). God alone knows the degree of culpability of these “sinners.” Moreover, some or all of them may have repented before they died. Both the ancient Jews and Catholic Christians always retain hope for the salvation of the deceased this side of heaven; thus, we always pray for those who have died.

In Matthew 5:25-26, Jesus is even more explicit about Purgatory.

Make friends quickly with your accuser, while you are going with him to court, lest your accuser hand you over to the judge, and the judge to the guard, and you be put in prison; truly I say to you, you will never get out till you have paid the last penny.

For Catholics, Tertullian for example, in De Anima 58, written in ca. AD 208, this teaching is parabolic, using the well-known example of “prison” and the necessary penitence it represents, as a metaphor for Purgatorial suffering that will be required for lesser transgressions, represented by the “kodrantes” or “penny” of verse 26. But for many Protestants, our Lord is here giving simple instructions to his followers concerning this life exclusively. This has nothing to do with Purgatory.

This traditional Protestant interpretation is very weak contextually. These verses are found in the midst of the famous “Sermon on the Mount,” where our Lord teaches about heaven (vs. 20), hell (vs. 29-30), and both mortal (vs. 22) and venial sins (vs. 19), in a context that presents “the Kingdom of Heaven” as the ultimate goal (see verses 3-12). Our Lord goes on to say if you do not love your enemies, “what reward have you” (verse 46)? And he makes very clear these “rewards” are not of this world. They are “rewards from your Father who is in heaven” (6:1) or “treasures in heaven” (6:19).

Further, as St. John points out in John 20:31, all Scripture is written “that believing, you may have [eternal] life in his name.” Scripture must always be viewed in the context of our full realization of the divine life in the world to come. Our present life is presented “as a vapor which appears for a little while, and afterwards shall vanish away” (James 1:17). It would seem odd to see the deeper and even “other worldly” emphasis throughout the Sermon of the Mount, excepting these two verses.

When we add to this the fact that the Greek word for prison, phulake, is the same word used by St. Peter, in I Peter 3:19, to describe the “holding place” into which Jesus descended after his death to liberate the detained spirits of Old Testament believers, the Catholic position makes even more sense. Phulake is demonstrably used in the New Testament to refer to a temporary holding place and not exclusively in this life.

I Corinthians 3:11-15 may well be the most straightforward text in all of Sacred Scripture when it comes to Purgatory:

For no other foundation can any one lay than that which is laid, which is Jesus Christ. Now if any one builds on the foundation with gold, silver, precious stones, wood, hay, stubble—each man’s work will become manifest; for the Day will disclose it, because it will be revealed with fire, and the fire will test what sort of work each one has done. If the work which any man has built on the foundation survives, he will receive a reward. If any man’s work is burned up, he will suffer loss, though he himself will be saved, but only as through fire.

No Christian sect I know of even attempts to deny this text speaks of the judgment of God where the works of the faithful will be tested after death. It says our works will go through “fire,” figuratively speaking. In Scripture, “fire” is used metaphorically in two ways: as a purifying agent (Mal. 3:2-3; Matt. 3:11; Mark 9:49); and as that which consumes (Matt. 3:12; 2 Thess. 1:7-8). So it is a fitting symbol here for God’s judgment. Some of the “works” represented are being burned up and some are being purified. These works survive or burn according to their essential “quality” (Gr. hopoiov – of what sort).

What is being referred to cannot be heaven because there are imperfections that need to be “burned up” (see again, Rev. 21:27, Hab. 1:13). It cannot be hell because souls are being saved. So what is it? The Protestant calls it “the Judgment” and we Catholics agree. We Catholics simply specify the part of the judgment of the saved where imperfections are purged as “Purgatory.”

The Protestant respondent will immediately spotlight the fact that there is no mention, at least explicitly, of “the cleansing of sin” anywhere in the text. There is only the testing of works. The focus is on the rewards believers will receive for their service, not on how their character is cleansed from sin or imperfection. And the believers here watch their works go through the fire, but they escape it!

First, what are sins, but bad or wicked works (see Matthew 7:21-23, John 8:40, Galatians 5:19-21)? If these “works” do not represent sins and imperfections, why would they need to be eliminated? Second, it is impossible for a “work” to be cleansed apart from the human being who performed it. We are, in a certain sense, what we do when it comes to our moral choices. There is no such thing as a “work” floating around somewhere detached from a human being that could be cleansed apart from that human being. The idea of works being separate from persons does not make sense.

Most importantly, however, this idea of “works” being “burned up” apart from the soul that performed the work contradicts the text itself. The text does say the works will be tested by fire, but “if the work survives… he will receive a reward. If any man’s work is burned up, he shall suffer loss.” And, “he will be saved, but only as through fire” (Gr. dia puros). The truth is: both the works of the individual and the individual will go through the cleansing “fire” described by St. Paul in order that “he” might finally be saved and enter into the joy of the Lord. Sounds an awful lot like Purgatory.

The Papacy in Scripture – More Than ...