Was the Woman Caught in Adultery Original to John’s Gospel? 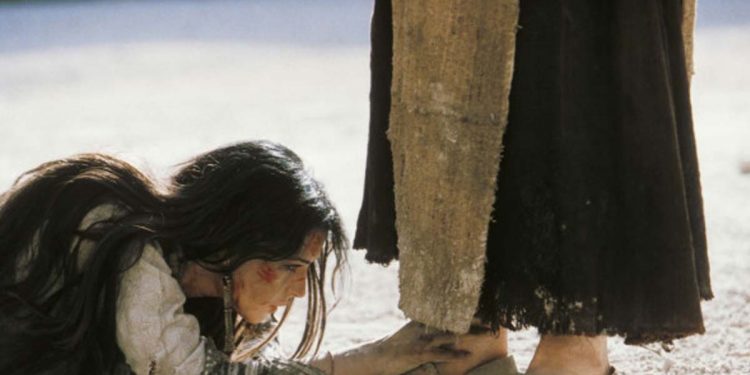 When people talk about “the earliest manuscripts,” they are really talking about just four manuscripts: John 8:1-11 is not found in manuscripts referred to by scholars as P66 and P75, both of which have been dated to the late 100’s (with P66) to the early 200’s (P75), which is very significant to be sure. And it is not found in two of the oldest and most important complete manuscripts dated to the mid-fourth century, Codex Sinaiticus and the most important and oldest of the complete manuscripts of the Bible, Codex Vaticanus (ca. AD 350). The first Greek manuscript extant to contain these verses is the Latin/Greek diglot (two parallel translations) Codex Bezae, produced in ca. AD 450.

So, why would we not find this story in these ancient manuscripts? There are multiple reasons. St. Augustine, writing before Codex Bezae gives us insight into the fact that there were already manuscripts that contained this famous pericope that were lost. In fact, St. Augustine assumes common knowledge that the story was in fact in the original when in De conjugiis adulterinis, 2, 6, he says the story was purposely removed from manuscripts of the New Testament by the various rigorist movements of the early Church (e.g. the Montanists who took the great Tertullian away from the true Faith, the Novatians, et. al.) because it presented Jesus as forgiving one of the “unforgivable sins” of the rigorists, i.e. adultery. They saw this story as tantamount to the Lord encouraging sin:

Certain persons of little faith, or rather enemies of the true faith, fearing, I suppose, lest their wives should be      given impunity in sinning, removed from their manuscripts the Lord’s act of forgiveness toward the adulteress, as if he who has said, “Sin no more,” had granted permission to sin.

St. Augustine may well be on to something here because we have a large amount of evidence that the text was, in fact, to be found in early manuscripts of the Gospels, and certainly in the Tradition of the Church from the very beginning. For example, we have a reference from the disciple of St. John, Papias, in the second century, recorded by Eusebius of Caesarea (Ecclesiastical Tradition, Bk. III, para. 16), who writes in passing of what was most likely an Aramaic original of St. Matthew’s Gospel containing the story. St. Matthew would also give us the Gospel we have today that did not include the story, but see here how Eusebius writes as if this is common knowledge:

But concerning Matthew [Papias] writes as follows: “So then Matthew wrote the oracles in the Hebrew language, and every one interpreted them as he was able.” And the same writer uses testimonies from the first Epistle of John and from that of Peter likewise. And he relates another story of a woman, who was accused of many sins before the Lord, which is contained in the Gospel according to the Hebrews.

If you believe Matthew was the “first” Gospel, as I do, it would then become an important source for the other Gospels—certainly St. John’s Gospel, which was written last. Thus, the story of the woman caught in adultery may have been recorded by St. Matthew as well as by St. John with only St. John’s making its way into Holy Writ.

The Syriac Didascalia Apostolorum, section 39, which was composed in ca. AD 250, obviously refers to and quotes this text challenging bishops to forgive those who repent of their sins. This would have been prophetic being written at a time, unfortunately, when the rigorism of the Montanists and the Novatians especially was in full bloom:

For if you receive not him who repents, because thou art merciless, thou sinnest against the Lord God, because thou dost not obey our Lord and God in acting as He acted; for even He to that woman who had sinned, her whom the elders placed before him and left it to judgment at His hands, and went away; he then who searcheth the hearts, asked her and said to her, “Have the Elders condemned thee, daughter?” She saith to him, “No, Lord. And our Savior said, Go, and return no more to this, neither do I condemn thee.” In this, therefore, let our Savior and King and God be to you a sign, O Bishops! Be like Him, that ye may be gentle and humble and merciful and clement…

John 8:1-11  was also very significantly contained in St. Jerome’s Latin Vulgate, which he translated in AD 383, most certainly using ancient manuscripts no longer available to us. And later, in ca. 417, St. Jerome would, in fact, say he found this pericope in “many Greek and Latin manuscripts.”

Then we have the Constitution of the Holy Apostles, Book II, Ch. 24, written ca. AD 380 echoing the earlier Didascalia Apostolorum:

He says also to another, a woman that was a sinner: Your sins, which are many, are forgiven, for you love much (citing Luke 7:47). And when the elders had set another woman which had sinned before Him, and had left the sentence to Him, and had gone out, our Lord, the Searcher of the hearts, inquiring of her whether the elders had condemned her, and being answered No, He said to her: Go your way therefore, for neither do I condemn you. This Jesus, O you bishops, our Savior, our King, and our God, ought to be set before you as your pattern…

Quotations from the Fathers and early Christian writers are plentiful. The great Eastern Father, St. Didymus the Blind, writing in the mid to late 300’s writes specifically that “We find in certain Gospels an episode in which a woman was accused of a sin, and was about to be stoned, but Jesus intervenes” (see https://en.wikipedia.org/wiki/Jesus_and_the_woman_taken_in_adultery). Ambrosiaster alludes to it ca. AD 370. St. Ambrose, in AD 390. One of the key anti-Novatian writers defending orthodoxy in the late 4th century, Pacian of Barcelona writes: “O Novatians, why do you delay to ask an eye for an eye? … Kill the thief. Stone the petulant. Choose not to read in the Gospel that the Lord spared even the adulteress who confessed, when none had condemned her.” St. Peter Chrysologus, writing in ca. AD 450, quotes from the text of John 8:1-11 in his Sermon 115.

And the Codex Vaticanus, the oldest and most important manuscript of Scripture bar none actually contains what is called an “amlaut” in the margin at the end of John 7, which indicates there was an alternate reading of St. John’s Gospel known to the translators at that time (ca. AD 350, though there is debate as to precisely when the amlaut was actually placed there).

There is much more research that is yet to be accomplished on this question, including the possibility that Tatian’s Diatesseron of AD 170 may well have contained this pericope, but in the end, though there is much evidence to accept John 8:1-11 as part of the canon, the ultimate reason why I accept it is the same reason why St. Augustine accepted the Gospels at all:

For my part, I should not believe the gospel except as moved by the authority of the Catholic Church. So when those on whose authority I have consented to believe in the gospel tell me not to believe in Manichæus, how can I but consent (Against the Manicheans, Ch. 5, Para. 6).

Ordinary Time is NOT Ordinary