Did Tertullian and St. Augustine Deny the Real Presence? 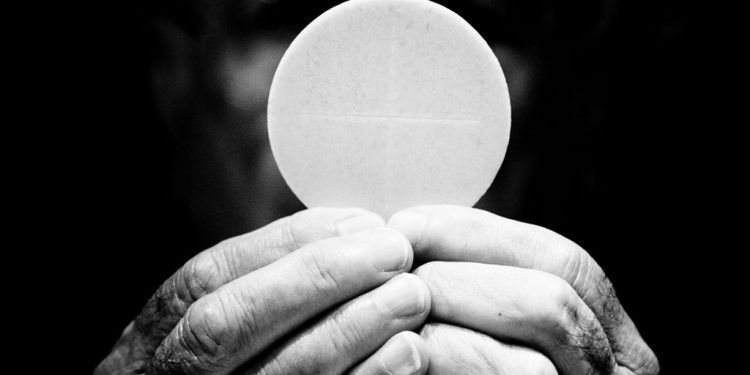 Many Protestant apologists claim we Catholics present a partial picture of the early Fathers with regard to the Eucharist. Both Tertullian and St. Augustine, they will claim, did not believe in the “Real Presence,” as Catholics refer to the teaching of the Church on Transubstantiation.

The examples they use are:

Then, having taken the bread and given it to His disciples, He made it His own body, by saying, “This is my body,” that is, the figure of my body. A figure, however, there could not have been, unless there were first a veritable body.

If a preceptive statement [in the Scriptures] forbids either vice or crime, or commands what is either useful or beneficial, it is not figurative. If, however, it seems to command vice or crime, or forbid what is either useful or beneficial, it is figurative. “Unless,” He says, “you eat the flesh of the Son of Man and drink His blood, you shall not have life in you.” It seems to command crime or vice; therefore it is a figure prescribing that there be communication in the Lord’s passion and a grateful and salutary treasured remembrance that His flesh was crucified and wounded for us.

Both of these men clearly teach the Eucharist to be “figurative.” So does this mean not all early Christians and Fathers of the Church believed in the Real Presence?

Moreover, it is argued, none of the Fathers used the term “transubstantiation.” Are Catholics claiming something to be true that is contrary to what at least these two famous early Christians believed?

Actually, the Fathers of the Church were clearly unanimous when it comes to the Real Presence. As far as Tertullian is concerned, there is some question as to whether or not he should be categorized as a true Church Father because of the fact that he died a Montanist heretic. But that doesn’t really matter for our purpose here, because he clearly did believe in the Real Presence anyway.

When Tertullian and St. Augustine use the term “figurative,” they do not mean to deny the Real Presence. In the texts cited, St. Augustine, for example, is warning against falling into the trap of believing the Lord was going to cut off parts of his body and give them to us. This would be cannibalistic and that is a definite no-no.

Indeed, both Tertullian and St. Augustine are emphasizing the fact that the Lord’s body and blood are communicated under the “appearances,” “signs,” or “symbols” of bread and wine. “Figure” is a synonym for “sign.” Even today the Catechism of the Catholic Church uses the terms “sign” and “symbol” to describe the Eucharist in paragraphs 1148 and 1412.

In the case of Tertullian, all we have to do is go on reading in the very document quoted above to get a sense of how he is using the term “figure,” and it is entirely Catholic. Notice what he goes on to say:

Then, having taken the bread and given it to His disciples, He made it His own body, by saying, This is my body, that is, the figure of my body. A figure, however, there could not have been, unless there were first a veritable body. An empty thing, or phantom, is incapable of a figure. If, however, (as Marcion might say,) He pretended the bread was His body, because He lacked the truth of bodily substance, it follows that He must have given bread for us. It would contribute very well to the support of Marcion’s theory of a phantom body…

Tertullian’s point here is that Marcion’s “theory of a phantom body” fits with Christ “pretend[ing] the bread was His body,” because Marcion denied Jesus had a body in the first place. But the Christian believes Christ “made it His own body, by saying, This is my body.” The transformation does not take away the symbolic value of bread and wine, it confirms it.

Tertullian makes clear in multiple places that he believed that Jesus communicated his true body and blood under the “figures” or appearances of bread and wine:

On Prayer, Of Stations (Fasting), chapter 19:

Similarly, too, touching the days of Stations, most think that they must not be present at the sacrificial prayers, on the ground that the Station (fast) must be dissolved by reception of the Lord’s Body. Does, then the Eucharist cancel a service devoted to God, or bind it more to God?

He (the prodigal who comes back to Christ) receives again the pristine garment,–the condition, to wit, which Adam by transgression had lost. The ring also he is then wont to receive for the first time, wherewith, after being interrogated, he publicly seals the agreement of faith, and thus thenceforward feeds upon the fatness of the Lord’s body—the Eucharist, to wit.

Here, St. Augustine comments on Psalm 119:109 in the Vulgate. The modern translations will more accurately say I hold my “life,” or my “soul” in my hands, or, “my life is at risk.” The Vulgate says, “And he was carried in his own hands.” This is the text St. Augustine would have known. He comments:

As far as the term transubstantiation is concerned, it is true that the term was not used authoritatively by the Church until the famous “Definition of Faith” of the 4th Lateran Council in AD 1215. And it would be infallibly defined by the Council of Trent. However, this is simply the term the Church used to define a belief that goes back to the inspired words of Christ himself. It describes the biblical belief that the “substance” or “nature” of bread and wine at the Liturgy are transformed into the body and blood of Christ, while the “accidents” or “appearances” of bread and wine remain. The Fathers used multiple ways to communicate this truth even if they did not use the term “transubstantiation.”

Here are just two examples among the many I could cite:

Notice these Fathers plainly declare the nature of the bread to have been changed into the body of Christ. That is the essence of what transubstantiation means.

You’ll also notice, especially with St. Cyril, that the term “figure” will be used as a synonym of “sign” just as we saw with Tertullian and Augustine while the context makes clear that he believes in the Real Presence.

And then (after new converts have been baptized) the deacons immediately bring the oblation to the bishop; and he eucharists the bread into the antitype of the Body of Christ; and the cup of mixed wine, for an antitype of the Blood, which was shed for all who believe in Him; and milk and honey mixed together for the fulfillment of the promise made to the fathers, which spoke of a land flowing with milk and honey, that is, the very flesh of Christ which He gave and by which they who believe are nourished like little children . . .

For Paul proclaimed clearly that: “On the night in which He was betrayed, our Lord Jesus Christ, taking bread and giving thanks, broke it and gave it to His disciples, saying, ‘Take, eat, This is My Body.’ And taking the cup and giving thanks, He said, ‘Take, drink, This is My Blood.’” He Himself, therefore, having declared and said of the Bread, “This is My Body,” who will dare any longer to doubt? And when He Himself has affirmed and said, “This is My Blood,” who can ever hesitate and say it is not His Blood?…

Do not, therefore, regard the Bread and the Wine as simply that; for they are, according to the Master’s declaration, the Body and Blood of Christ. Even though the senses suggest to you the other, let faith make you firm. Do not judge in this matter by taste, but–be fully assured by the faith, not doubting that you have been deemed worthy of the Body and Blood of Christ.

Do the “Dead Know Nothing?”