John 6 and the Eucharist 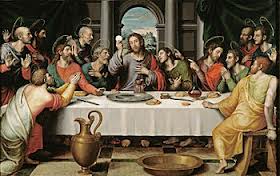 In my 2011 debate with Dr. Peter Barnes, a Presbyterian minister and apologist in Australia, the topic was the real presence of Christ in the Eucharist, and it centered on Jesus’ famous words in John 6:53: “Unless you eat the flesh of the Son of man, and drink his blood, you have no life in you.” After about three hours of debate, I could sum up Barnes’s central objection in one sentence—a sentence which just happens to be found in the New Testament:

Dr. Barnes could not, and would not, deny the Lord said what he said in Scripture. His only recourse (as is the case with all who deny the real presence), ultimately, was to claim Jesus was speaking “metaphorically.” And after all, he had to be… right? I mean, “How can this man give us his flesh to eat?” In other words, his ultimate objection to the Catholic and biblical position is not so much rooted in the text as it is in a fundamental incredulity when it comes to the words of the text.

I argued in that debate, and I will again in this post, that if we examine the text carefully, not only is there nothing in it that indicates Jesus was speaking purely metaphorically, but the text itself actually points in the opposite direction.

Here are the Facts

First, everyone listening to Jesus’ actual discourse 2,000 years ago believed him to have meant what he said. That is significant. This is in stark contrast to other places in the gospel where Jesus did, in fact, speak purely metaphorically. For example, when Jesus spoke of himself as a “door” in John 10, or a “vine” in John 15, we find no one to have asked, “How can this man be a door made out of wood?” Or, “How can this man claim to be a plant?”

Compare these to John 6. Jesus plainly says, in verse 51, “I am the bread come down from heaven and the bread that I will give is my flesh for the life of the world” (vs. 51). The Jews immediately respond, as I said above, “How can this man give us his flesh to eat?’” They certainly understood him to mean what he said.

Moreover, when people misunderstand Jesus, he normally clears up the misunderstanding as we see in John 4:31-34 when the disciples urge our Lord to eat and our Lord responds, “I have food to eat which you do not know.” The disciples ask each other if anyone had brought any food because they thought our Lord was saying he had to bring his own food because they had forgotten to do so. They misunderstand him. But our Lord immediately clears things up saying, in verse 34, “My food is to do the will of him who sent me, and to accomplish his work.”

In our debate, Dr. Barnes had a very interesting rejoinder to this point. He claimed, in essence, that in at least some cases when his listeners misunderstood our Lord, he purposely made no attempt to clear up the misunderstandings. And Dr. Barnes then cited three more examples claiming this to be a pattern in the gospels.

1. In John 3:3-4, Dr. Barnes claimed, Jesus left Nicodemus in the dark when after he declared to him, “… unless one is born anew, he cannot see the kingdom of God,” Nicodemus responded, “How can a man be born when he is old? Can he enter a second time into his mother’s womb and be born?”

Response: Even a brief perusal of John 3 and John 6 shows a substantial difference between the two. In John 6:52-53, the Jews were “disputing among themselves and saying, ‘How can this man give us his flesh to eat?’” That is the context in which Jesus then appears to confirm them in their thoughts and reiterates, “Truly, truly, I say to you, unless you eat the flesh of the Son of man and drink his blood, you have no life in you.”

No matter how one interprets Jesus’ response to Nicodemus beginning in John 3:5, he doesn’t come close to saying anything like, “Amen, amen I say to you, unless you climb back into your mother’s womb a second time and be born anew, you cannot have eternal life.” He says you must be “born of water and spirit… the wind blows where it will, and you hear the sound of it, but you do not know whence it comes or whither it goes; so it is with everyone who is born of the Spirit (vs. 5-8).” This seems to me to be clarification that he is not speaking about climbing back into a mother’s womb. Being “born anew” is a spiritual experience that transcends literal birth from a womb.

2. In John 4:7-15, Dr. Barnes claimed, Jesus left the famous “Samaritan woman at the well” in her misunderstanding when she thought Jesus was offering her literal, physical water. But is that really what we find in the text?

Response: When Jesus asked this Samaritan woman for a drink in verse seven, she was most likely not only shocked that a Rabbi would speak to a Samaritan woman in public, but that any Jew would ask an “unclean” Samaritan to draw water for him. But in verse 10, Jesus answered her,

If you knew the gift of God, and who it is that is saying to you, “Give me a drink,” you would have asked him, and he would have given you living water.

In verse 15, the woman then begs our Lord, “Sir, give me this water, that I may not thirst, nor come here to draw.”

There is no doubt the Samaritan woman has it wrong here. But far from leaving her in her error, our Lord responds most profoundly, beginning in verse 16, “Go, call your husband…” And when the woman responds, “I have no husband,” in verse 17, Jesus reads her soul and tells her, “You are right… for you have had five husbands, and he whom you now have is not your husband.”

He now has her attention, to say the least. And he then turns the conversation to what he was really speaking about in terms of the “living water” he came to give that would “well up to eternal life.” In verse 23, he declares,

When the woman then responds, in verse 25, “I know that Messiah is coming (he who is called Christ); when he comes, he will show us all things,” Jesus then tells her plainly, in verse 26, “I who speak to you am he.”

It seems clear that the woman then understood that Jesus’ words were metaphorical concerning the “living water,” because she immediately “left her water jar,” went back to her fellow countrymen and urged them to, “Come, see a man who told me all that I ever did. Can this be the Christ” (verses 28-29)? And according to verse 39, “Many Samaritans… believed in him because of the woman’s testimony.” Notice, she did not go and say, “You’ve got to meet this man that will give us a limitless supply of water!” She came to realize Jesus was about much more than filling war jars.

3. Dr. Barnes also claimed that when Christ said “beware of the leaven of the Pharisees” in Matthew 16:6, the apostles thought he was speaking literal, which is true. But Matthew 16:11-12 could hardly be plainer that Jesus did not leave them in their ignorance:

How is it that you fail to perceive that I did not speak about bread… Then they understood that he did not tell them to beware of the leaven of bread, but of the teaching of the Pharisees and Sadducees.

There is much more about the text of John 6 and the greater context of the New Testament in general that make a “Catholic” understanding of John 6:53 unavoidable. In our debate, Dr. Barnes and I grapple with many of those texts.

But John 6:63 is probably the most important of all to deal with as a Catholic apologist. This is a verse that is set within a context where not only “the Jews” who were listening, but specifically “the disciples” themselves were struggling with what Jesus said about “eating his flesh” and “drinking his blood.” “This is a hard saying; who can listen to it” (verse 60)? It is in this context that our Lord says to the disciples: “It is the spirit that gives life, the flesh is of no avail; the words that I have spoken to you are spirit and life.”

The Protestant apologist will almost invariably say of this text, “See? Christ is not giving us his flesh to eat because he says ‘the flesh is of no avail.’”

There are at least four points to consider in response:

1. If Jesus was clearing up the point here, he’s a lousy teacher because he didn’t get his point across. According to verse 66, “many of his disciples drew back and no longer went about with him” immediately after this statement. They obviously still believed his earlier words about “eating [his] flesh” to be literal because these “disciples” had already believed in and followed him for some time. If Jesus was here saying, “I only meant that you have to believe in me and follow me,” why would they be walking away?

2. Jesus did not say, “My flesh is of no avail.” He said, “The flesh is of no avail.” There is a big difference! He obviously would not have said my flesh avails nothing because he just spent a good portion of this same discourse telling us that his flesh would be “given for the life of the world” (John 6:51, cf. 50-58).

3. That which is “spiritual,” or “spirit” used as an adjective as we see in John 6:63, does not necessarily refer to that which has no material substance. It often means that which is dominated or controlled by the Spirit. For example, when speaking of the resurrection of the body, St. Paul writes: “It is sown a physical body, it is raised a spiritual body” (I Cor. 15:44). Does this mean we will not have a physical body in the resurrection? Of course not! Jesus made that clear after his own resurrection in Luke 24:39:

See my hands and my feet, that it is I myself; handle me, and see; for a spirit has not flesh and bones as you see that I have.

The resurrected body is spiritual and indeed we can be called spiritual as Christians inasmuch as we are controlled by the Spirit of God. Spiritual in no way means void of the material. That would be a Gnostic understanding of things, not Christian.

4. In verses 61-62, Jesus had just said, “Do you take offence at this? Then what if you were to see the Son of man ascending where he was before?”

Jesus wants to ensure the apostles do not fall into a sort of crass literalism that would see the truth of the Eucharist in terms of gnawing bones and sinew. It is the Holy Spirit that will accomplish the miracle of Christ being able to ascend into heaven bodily while also being able to distribute his body and blood in the Eucharist for the life of the world. A human body—even a perfect one—apart from the power of the Spirit could not accomplish this.

Does Praying to Saints Equal Worshipping the ...