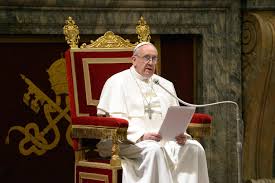 Have you heard? Tom Horn and Cris Putnam have written the book of books demonstrating Pope Francis to be the last pope. Yes, folks, the end of the world is upon us. The book is called Petrus Romanus: The Final Pope is Here, published in 2012. This is not to be confused with their sequel, Exo-Vaticanus, published in 2013, which exposes a secret plan of the Vatican to usher in the arrival of a savior who is actually an alien a la E.T. I suppose now that the end is here and all, we need to know just what the end is going to look like. Explaining that one would require another post.

The 2012 book is based on an increasingly popular alleged prophecy, which is really more of a litany of prophecies, of the great reformer Bishop St. Malachy (1094-1148), who served as bishop of Conner, then Down, and finally as Archbishop of Armagh, all in Ireland. The authors claim St. Malachy predicted the final 112 popes beginning with Pope Celestine II (elected in 1143), not by name, but by a short epithet, or motto, for each, leading us to the final pope before the Apocalypse, who is none other than our own Pope Francis.

The “prophecy” in question is real in the sense that it exists and is claimed to be written by St. Malachy. But when examined critically, it turns out neither to be true (meaning it contains things that don’t hold up the level of scrutiny required of a true prophecy) nor actually written by St. Malachy. At least, that is what the overwhelming majority of modern scholars believe. The so-called “prophecy of St. Malachy” appears to be a fraud.

There are multiple takes on the “prophecy” itself, and not all who believe it also believe a space alien is going to be revealed as “savior” by the Vatican, either. Over the centuries, it has been believed by Catholics of note, Cornelius a Lapide among them. So it is not as though its fraudulent nature is self-evident.

From what I have read from those who believe the prophecy to be of supernatural origin today, they generally agree on three central points: Francis is the final pope, the end is therefore upon us, and St. Malachy proves it to be so.

Problems with the Prophecy

While there are more problems with this prophecy than we have space to address in this post, perhaps its major problems, or categories of problems, could be broken down into two: 1. The prophecy was not penned by St. Malachy; therefore, it is a fraud. 2. The epithets, or mottos, that describe each of the 112 popes are fraught with ambiguities to the point that some are impossible to defend as true prophecy.

Who Wrote the Prophecy of St. Malachy?

The prophecy was first published in AD 1590-1595 by a Benedectine monk named Arnold Wion in a book titled Lignum Vitae, which was a history of the Benedictine order. Critics say Wion did more than publish it; he most likely created it. This is evidenced by the fact that the alleged prophetic mottos were remarkably accurate when the popes from Celestine II (pope when St. Malachy was alive and when the “prophecy” was allegedly given to him) until Urban VII (pope when Wion published the book) are mentioned. After these popes the epithets become ambiguous and, as we’ll see below, some of them virtually impossible to tag to the popes they were supposedly referring to.

When you couple these facts with the facts that St. Bernard of Clairvaux—a close friend of St. Malachy, who wrote the biography of this great saint—never mentions anything of this prophecy, and, indeed, nothing that we know of was recorded about it for the roughly four hundred years between St. Malachy’s time and the publication of the prophecy, this is a definite problem.

Proponents argue the prophecy was lost and only rediscovered by Wion, but this hardly answers the problem of why St. Bernard, in whose arms St. Malachy died, would have known nothing of it.

Perhaps the most damning evidence against the claims of the prophecy can be seen by examining the actual prophetic epithets themselves. The epithets of the popes between Celestine II and Urban VII are generally related to their birthplaces, family names, their coat of arms, or to some title they held before each became pope. And they are generally quite obvious. However, the subsequent popes . . . let’s just say their mottos get very interesting at times. Here are some of my favorites.

Pope Benedict XIV is referred to as “rustic animal”—in Latin, animal rurale. This means something akin to what southerners might call a “country boy.” But Benedict XIV was anything but a country boy. He was a brilliant scholar educated in Rome at the Collegium Clementium, which he entered at the age of 13! He was well-known for his learning in science as well as theology, philosophy, and canon law. He was also an exceptional administrator and a man of many talents, respected within and without the Church. He was anything but animal rurale!

Proponents of the prophecies attempt to say this could refer to his “plodding determination” like an ox in a field. Can anyone say “Weak?”

Pope Clement XIII is referred to as “Rose of Umbria.” Supporters of the prophecies attempt to say this is a reference to the several Franciscans this pope canonized. You know. . . roses . . . St. Francis. The “Rose of Umbria.”

Clement IV is referred to as “Swift Bear.” Proponents claim his family, the Ganganelli family, had a running bear on their coat of arms, but there is no evidence for this.

Pius VII is referred to as “Rapacious Eagle.” There is nothing even close to this in relation to the Pope himself, so supporters claim this may be a reference to the arms of Napoleon who reigned during the time of Pope Pius. It definitely seems as though we are stretching things here in Jonathan Edwards-esque fashion.

John Paul I is referred to as “of the half moon.” Your guess is as good as mine.

And finally, we should mention our present Pope Francis. He is referred to as “Peter the Roman” in the prophecy. The best the proponents of the prophecy have been able to do is point out that our good Cardinal Bergoglio took the name of St. Francis, whose father’s name was Pietro. Of course! Plus, even though he is Argentinian, his parents are Italian. Huh? Huh?

There are many more examples we could cite here demonstrating the overwhelming evidence that the so-called “prophecy of St. Malachy” is a hoax, but perhaps it would be best to close now with a word to the wise.

We must always be careful with private revelations—and that is essentially what this is—whether approved or not. The “prophecy of St. Malachy” has not been approved by the Church, but the Church teaches us that we must never place divine faith in any private revelation even if it is approved. Their role is to lead us to Christ in his Church and to the divine faith that is able to save our souls. They are means and never ends in themselves.

If we keep our focus on Christ, his Church, the Eucharist, and our Blessed Mother, we will never go wrong.