Is Reincarnation in the Bible? 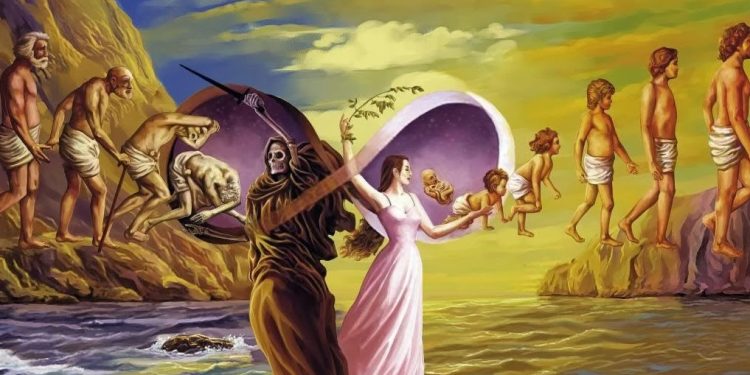 Recently, I was asked the question: “If you, as a Catholic, believe in the natural immortality of the human soul, why would you not believe in reincarnation? After all, didn’t Jesus indicate John the Baptist was the reincarnation of the prophet Elijah, in Matthew 17:10-13?”

And the disciples asked him, “Then why do the scribes say that first Eli’jah must come?” He replied, “Eli’jah does come, and he is to restore all things; but I tell you that Eli’jah has already come, and they did not know him, but did to him whatever they pleased. So also the Son of man will suffer at their hands.” Then the disciples understood that he was speaking to them of John the Baptist.

By “reincarnation,” I do not mean the souls in heaven being “reincarnated,” or being “made flesh” again in the resurrection of the same bodies they possessed in this life. That we simply refer to as “the Resurrection.” By “reincarnation,” I mean it as it is defined in the dictionary as “the rebirth of a soul in a new body, whether another human or animal body.”

First of all, Jesus is not speaking of reincarnation when he speaks of “Elijah [having] already come.” He speaks of St. John the Baptist having the spirit and the power of Elijah. In fact, Luke 1:16-17 helps us to understand Matthew 17:10-13 better when the angel Gabriel gives us further definition, if you will, of what “Elijah [having] already come” actually means. He says to Zechariah, the father of St. John the Baptist, concerning his son who would soon be miraculously conceived:

And he will turn many of the sons of Israel to the Lord their God, and he will go before him in the spirit and power of Eli’jah, to turn the hearts of the fathers to the children, and the disobedient to the wisdom of the just, to make ready for the Lord a people prepared.

Notice, he comes “in the spirit and power of Elijah” as a prophet of God. That is what is meant by “Elijah has already come.”

So What’s the Problem With Reincarnation?

The problem, or more accurately, problem[s] with reincarnation are manifold and very dangerous. CCC 1013 tells us:

Death is the end of man’s earthly pilgrimage, of the time of grace and mercy which God offers him so as to work out his earthly life in keeping with the divine plan, and to decide his ultimate destiny. When “the single course of our earthly life” is completed, we shall not return to other earthly lives: “It is appointed for men to die once.” There is no “reincarnation” after death.

The CCC here quotes Hebrews 9:27 –“Just as it is appointed that human beings die once, and after this the judgment.” Reincarnation implies multiple lives and multiple deaths. That’s a definite no-go.

But reincarnation is not only contradicted in Hebrews 9:27; it is also contradicted by our Lord himself in John 8:23:

The first man was from the earth, a man of dust; the second man is from heaven.

Only Christ is revealed in Scripture to have had a pre-human existence, or to be “from heaven.” Humans are revealed to have come “from the earth,” or “from this world.” Thus, we say Jesus Christ was “incarnated.” But even he was not “reincarnated.” Reincarnation implies a previous bodily existence. Or, as the term indicates, a former “fleshly” existence.

Philosophically speaking, “reincarnation” is impossible because the soul is the form of the body. In other words, it is the soul that “gives form to the body” as it is. A lot of folks confuse the particular “matter” or “the material” our body is made of right now with the essence of the body. The truth is, much of the actual matter of our bodies is changed and renewed over time, but we remain the same person in the process. While some parts of our bodies do not change (for example, we get no new neurons in our brains—if we lose ‘em, they’re gone for good!), the fat cells in our bodies, for example, are completely changed every ten years or so.

Bad news for dog lovers! Fido will not be resurrected because he possesses no spiritual soul that could then form the same body he possessed in this life. “Fido” would have to be created ex nihilo and would then be another dog. He would not be “Fido.” You could name him Fido, but he would be a different Fido than the one you knew and loved on earth!

Reincarnation is also problematic when we consider the fact that a human person is a body/soul composite. It is not only the soul nor is it only the body that individuates a person—it is both. (By the way, for philosophy buffs, St. Thomas Aquinas was off on this point when he taught the body, or “matter” alone was the individuating principle in human persons. He was influenced by Aristotle’s flawed thinking. Aristotle, though brilliant, was a pantheist who taught there is one collective “person” in which all human persons participate. Only the material or matter would then individuate us. However, when we die, the material body is gone, thus, the individual is no more! St. Thomas, obviously, did not take Aristotle to the point of accepting his final conclusion that led Aristotle to deny the immortality of the human soul as we understand it, but he was influenced by Aristotle to the point of teaching the body, or “matter,” to be the individuating principle of the human person, which is flawed).

But at any rate, the point to remember here is that man is a body/soul composite. Both contribute to what Joseph Ratzinger (now Pope Emeritus Benedict XVI), in his book, “Eschatology” calls “the mysterious ‘I.’” Thus, again, it would be impossible for a human soul to animate “another body” from two different parents. Ultimately, reincarnation is not only condemned by the Church on a theological level, but it is untenable on a philosophical level!

Some may say at this point, “So what? This is a harmless little error that never hurt anybody, right? You said reincarnation is ‘dangerous,’ but I’m not seeing the danger.”

Are there dangers inherent in believing reincarnation to be true? Actually, there are many. Here are just two of them:

1. It fails to make the essential distinction between men and animals. Human beings alone are created in the image and likeness of God; and therefore, possess rational and spiritual souls. It is the distinctive human soul that is the foundation of his unique dignity. It is the reason why we humans possess “certain unalienable rights” as our founding fathers rightly said in our Declaration of Independence here in the United States. Reincarnation either reduces men to the level of animals, raises animals to the level of humans with “rights,” etc., or it becomes some sort of confused hybrid of the two. But the result is always the same: a dangerous lack of understanding of the unique and inherent dignity of the human being.

2. It tends toward moral laxity because no matter how bad someone is in this life, he gets another shot… and another… and another! This is extremely dangerous! How opposite is this to our Lord’s teaching in the form of his words to the “rich man” in Luke 12:20-21, when God said to him, “Fool! This night your soul is required of you… So is he who lays up treasure for himself, and is not rich toward God.”

“… be ready, for the Son of man is coming at an hour you do not expect” (Matt. 24:44) loses not only its effectiveness, but its essential meaning.

Kim Davis is a Hero!