Mother Angelica – My Recollections of a Living Saint 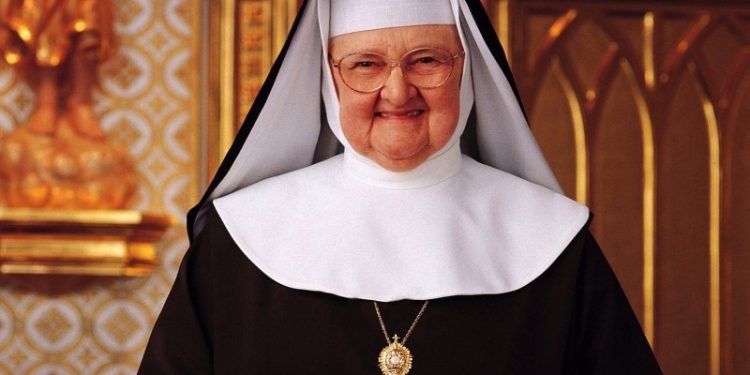 The first time I met Mother Angelica was in February of 1998, when I went to Birmingham, Alabama to appear on “Mother Angelica Live.” This was my very first time being on “The Eternal Word Television Network” (EWTN).

I was scared to death.

At the time, I was a young, budding apologist, trying to make my way, and very uncertain about my future. I was beginning to experience health problems that threatened my career as well as my life, and I was seriously doubting whether I could financially afford to continue to pursue a career in apologetics. My life was anything but stable. I was broke, living paycheck to paycheck, though not really. I was actually piling up debt. Let’s just say, my situation was not good, folks.

Now, don’t get me wrong here, I was doing talks, writing for my friend Patrick Madrid’s then fledgling “Envoy Magazine,” and doors were opening all over the world for me to do what I love best: defend our One, Holy, Catholic, and Apostolic Faith. All I wanted to do is tell people about Jesus! It was just that these other things were definitely casting a dark shadow of uncertainty about the future.

When I was asked to be on “Mother Angelica Live,” I was thrilled. But when I flew out to Birmingham, went to my room and began to think about the show I was about to do, I became petrified. “Oh my gosh, I am about to meet a living saint and be on Mother Angelica Live!”

As I said above, I was scared to death.

There are three main things that I remember, and vividly so, about being on that television show that day in February of 1998.

1. I was scared to death! Did I already say that?

2. When Mother began to talk to me, and then to pray with me and the folks there in the studio before we went on, I began to feel at ease. Then, when the actual show began and she began asking me questions about my conversion to the Catholic Faith and about various aspects of the Faith, I not only felt even more at ease, but the interview began to feel like I was just chattin’ with my grandma. There was such a charm and genuineness to this woman that cannot adequately be put into words.

Before long, I remember breaking down in tears as I shared my story, and Mother gave one of her famous “looks” at the camera as she handed me a tissue. It was hilarious! It was as if to say, “Look at this big palooka crying like a baby!”

3. I remember after the show, Mother greeted the studio audience, took pictures, signed a few things and chatted with each person who approached her. She truly was a wonderful human being. She was the real deal, as they say.

But before she would go back behind the grille to pray, I asked her for two favors. First, I told Mother that my mom would kill me if I did not get a signed photo. My mom was and is a huge fan. Mother immediately called for her assistant to oblige. She signed the photo for my mom that my mom cherishes to this day.

But then I asked her this: “Mother, I am a young fellow, just out of the seminary three and a half years, that needs some advice. I want to be able to work in apologetics full time. I feel as though it is a calling. But let’s just say things have not been going all that well in this direction. Do you have any words of advice?”

I will never forget her response.

She pointed her crooked finger at my heart and said, “You get out there and be a problem!”

There was an awkward pause and I’m sure Mother saw the blank expression on my face when she then added words to be effect of: “I mean that in the best sense of the terms ‘be a problem’. Just share the Gospel of Jesus Christ without compromise and he will take care of the rest. Don’t be afraid!”

I have tried to do just that ever since. Thank you, Mother!

Check out the MP3 of that interview here:

Let us all pray for Mother Angelica. I pray one day she will be canonized. When the bishops and basically the entire Catholic world was failing miserably at living up to the call of the Council (Vatican II) to use the media in evangelizing and catechizing the world, she stepped up to the plate. You all know the story. Her building of the EWTN empire was nothing short of miraculous. But most of all, Mother Angelica was a true woman of God. She was a woman of faith, hope, and most of all, love, who exemplified a true faithfulness that never compromised truth in her pursuit of the good and the beautiful.

Isn’t it just like our God to take her into eternity on Easter Sunday?

Why I Have Decided to Leave the ...