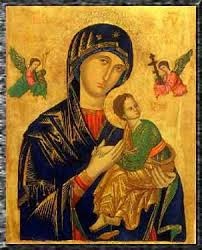 For many in the more traditional Protestant communities, believing Mary to be the Theotokos (Gr.—God-bearer), or Mother of God, is an area of agreement with Catholics. They may not see all of the theological implications of this dogma, but they believe it as such. They would acknowledge Mary to be the Mother of God as the logical result of their faith in Jesus as one divine person. If Jesus Christ is truly God, then Mary is truly the Mother of God. But for millions among Fundamentalist and Evangelical communities, it is a different story. Let’s just say they would not join in on January 1st when we Catholics celebrate the Solemnity of Mary, the Mother of God.

One can basically narrow down the objections to this great dogma of the faith to essentially three. The first states “the obvious.” No where in Sacred Scripture do we find the words “Mother of God” used to describe Mary. “If this doctrine were as important as Roman Catholics claim, would not at least one of the inspired writers have used it?” The second objection is rooted in Luke 1:43—a text used by Catholics to demonstrate a biblical foundation for the Theotokos—wherein Elizabeth “exclaimed [to Mary] with a loud cry, ‘Blessed are you among women, and blessed is the fruit of your womb! And why is this granted me, that the mother of my Lord should come to me?’” The Protestant Fundamentalist will point out this text does not call Mary Mother of God; it calls her “mother of my Lord.” The New Testament uses the term lord (Gr.—kurios) in the context of divinity at times, but it also uses it with reference to human persons in various contexts. This text, it is argued, does not refer to the divinity of Christ, but to his humanity. And finally, the point is made that it is impossible for God to have a Mother. “God is a Trinity. If Mary is the Mother of God, she is the mother of the Trinity! Therefore, the Trinity is no longer a Trinity, it would be a Quadrinity!”

Objection One: Where is That in the Bible?

To say Mary cannot be the Mother of God because sacred Scripture does not use those explicit words places the Protestant in a very uncomfortable position. He would also have to conclude multiple essential Christian doctrines to be erroneous because they are not found verbatim in the Bible either. Let’s just take the Trinity for example. This is “the central mystery of the Christian faith” (CCC 234), and yet the term “Trinity” is not found in the Bible. This is not to mention terms like homoousios (Gr.—same nature, Jesus has the “same nature” as his Father), hypostatic union, the circumincessions of the persons of the Blessed Trinity, etc. The question the Protestant really needs to ask is: Is the concept of Mary, Mother of God revealed to us in Sacred Scripture? And we will see that it is. Thus, this first point is quite easily dismissed.

Objection #2 is not so easily dismissed. The Greek word kurios or “lord” can indeed be used to denote divinity but not necessarily so. In fact, a great example of the latter is found in Corinthians 8:5:

Here the term “lord” (Gr. – kurios) is obviously not used to refer to divinity. Moreover, Christ himself refers to the “owner of the vineyard” in his parable of the householder in Matthew 21:33-40, as kurios, or “lord of the vineyard,” in verse 40. Thus, kurios can be used specifically with regard to a human person. However, if we go back to I Cor. 8:5, the very next verse gives us an example of kurios being used with regard to divinity:

The key to our discussion then is to ascertain how kurios is being used of Christ in Luke 1:43. Was it being used to describe Jesus with regard to his humanity alone, or with regard to his divinity? There are at least two reasons we can know for certain it refers to Christ as a divine person. First, if we understand its Old Testament antecedent, the conclusion becomes clear. Elizabeth was referring, almost verbatim, to a text from II Samuel 6:9 wherein David exclaims concerning the Old Testament ark of the Covenant:

And David was afraid of the LORD that day; and he said, “How can the ark of the LORD come to me?”

The second and most important reason we know Luke 1:43 is referring to Mary to be the Mother of God is summed up nicely in the Catechism of the Catholic Church, paragraph 495:

Called in the Gospels “the mother of Jesus,” Mary is acclaimed by Elizabeth, at the prompting of the Spirit and even before the birth of her son, as “the mother of my Lord.” In fact, the One whom she conceived as man by the Holy Spirit, who truly became her Son according to the flesh, was none other than the Father’s eternal Son, the second person of the Holy Trinity. Hence the Church confesses that Mary is truly “Mother of God” (Theotokos).

Mary is the Mother of God precisely because Jesus Christ, her Son, is God. And when Mary gave birth, she did not give birth to a nature, or even two natures; she gave birth to one, divine person. To deny this essential truth of the faith, as the Council of Ephesus (AD 431) declared, is to cut oneself off from full communion with Christ and his Church. In the first of many “anathemas” of St. Cyril, the famous fifth-century bishop of Alexandria, which would be accepted by the Council, it decreed:

If anyone does not confess that God is truly Emmanuel, and that on this account the Holy Virgin is the Mother of God (for according to the flesh she gave birth to the Word of God become flesh by birth), let him be anathema.

Notice, the Council referred to the prophecy of Isaiah 7:14 in its definition. This prophetic text prophesied over 700 years before the birth of Christ, the Messiah was to be born of a woman and yet he was to be “God with us.”

The real problem with denying Mary as Mother of God and affirming Mary to be only the mother of the man Christ Jesus is in doing so one invariably either denies the divinity of Christ (as the 4th century Arians did), or one creates two persons with regard to Jesus Christ. Either error results in heresy. The Ecumenical Councils of Nicaea (AD 325) and Constantinople (AD 381) dealt decisively with the Arian heresy. The Council of Ephesus (AD 431) as mentioned above dealt with this latter heresy as it was being taught by the followers of Patriarch Nestorius of Constantinople. Rather than teaching the truth that Christ is one divine person with two natures—one human, and one divine—hypostatically unified, or joined together without admixture in the one divine person of Christ, they were teaching Christ to be two persons with a mere moral union. The Council fathers understood this could never be affirmed by Christians. The Bible declares to us: “… in him the whole fullness of deity dwells bodily” (Colossians 2:9). And, “… in him all things were created, in heaven and on earth, visible and invisible…” (Colossians 1:16) No where do we read in them; we only read of him. One cannot overstate the importance of what we are discussing here because we are ultimately talking about essentially different Christs. Jesus is truly one divine person. If one prays to a Jesus who is two persons, one prays to a “Jesus” who does not exist!

By saying Mary is the Mother of God, the Catholic Church is not saying that Mary is the source of the divine nature among the three persons of the Blessed Trinity, nor is she the source of the divine nature of the second person of the Blessed Trinity. But then again, she doesn’t have to be in order to be the mother of the second person of the Blessed Trinity incarnate. Perhaps an analogy using normal human reproduction will help clarify the Catholic and biblical truth of the matter. My wife is the mother of my son, Timmy. But this in no way implies that she is the source of Timmy’s immortal soul. God directly and immediately created his soul as he does with every human being (see Eccl. 12:7). However, we do not conclude from this that my wife, Valerie, is merely “the mother of Timmy’s body.” She is Timmy’s mother… period. This is so because she did not give birth to a body. She gave birth to a human person who is a body/soul composite… Timmy.

Analogously, though Mary did not provide Jesus with either his divine nature or his immortal human soul, she is still his mother because she did not give birth to a body, a soul, a nature, or even two natures—she gave birth to a person. And that one person is God. The conclusion to the whole matter is inescapable. Just as many of the more traditional Protestants would confess with us as Catholics: If Jesus Christ is one, eternal and unchangeable divine person—God—and Mary is his mother—then Mary is the Mother of that one, eternal and unchangeable person—God.

If you are interested in diving deeper into this and more about Mary, the Mother of God, click here for much more!

Was Jesus Born on Christmas Day?

Sola Scriptura – An Unbiblical Recipe for ...