The Assumption of Mary 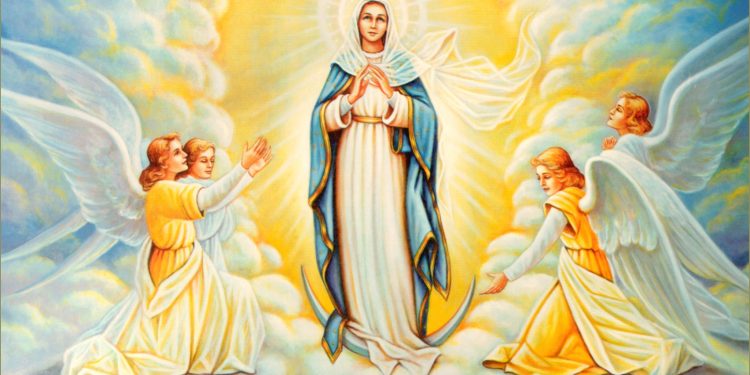 Tomorrow we celebrate the great Feast of the Assumption of Mary. It is a time of rejoicing in the Catholic Church. But for many Christians, this celebration is wrong-headed. In fact, for some it is downright blasphemous. And there are two texts of Scripture most commonly used to “prove” the point:

No one has ascended up to heaven, but he who descended from heaven, the Son of man.

If “no man” has ascended into heaven, wouldn’t that include the Blessed Virgin Mary?

For as in Adam all die, even so in Christ shall all be made alive. But every man in his own order: Christ the firstfruits; afterward they that are Christ’s at his coming.

If no one except Christ will be resurrected bodily before the Second Coming of Christ, would that not eliminate the possibility of Mary having been bodily assumed into heaven?

John 3:13 does not eliminate the possibility of the Assumption of Mary for four reasons.

1. St. John was quoting the actual words our Lord spoke when he wrote, “No one has ascended into heaven, but . . . the Son of man.” Jesus was merely saying that no one had ascended into heaven by the time he made that statement. That was long before the Assumption of Mary.

2. Jesus cannot be saying that no one else will ever be taken to heaven. If that is the case, then what is all this Christianity stuff about? You know, heaven and all.

3. If one interprets John 3:13 as speaking about Christ uniquely ascending to heaven, that would be acceptable. We would then have to ask the question: what is it about Jesus’ ascension that is unique? Well, the fact that he ascended is unique. Mary did not ascend to heaven. She was assumed. There is a big difference. Jesus ascended by his own divine power as he prophesied he would in John 2:19-21: “Destroy this temple, and in three days I will raise it up . . . he spoke of the temple of his body.” Mary was powerless to raise herself to heaven; she had to be assumed. The same could be said of all Christians. Jesus raised himself from the dead. Christians will be entirely passive when it comes to their collective “resurrection.”

4. St. John is demonstrating the divinity of Christ in John 3:13. Historically, we know St. John was writing against his archenemy, the heretic Cerinthus, who denied the divinity of Christ (according to, for example, St. Irenaeus, and Eusebius of Caesarea). St. John quotes these words from Jesus to demonstrate that the Savior “descended” from heaven and was both in heaven and on Earth as the “only begotten Son” (cf. 3:16) sharing his Father’s nature (cf. 5:17-18). Thus, he was truly God. St. John also emphasizes that even while “the Son of Man” walked the Earth with his disciples in Galilee, he possessed the beatific vision in his human nature. In that sense, his human nature (Son of Man) had already “ascended” into heaven inasmuch as it possessed the beatific vision, which is at the core of what heaven is. That is John’s theme in the text, not whether someone years after Christ could be assumed into heaven or not.

1. We must remember that there are sometimes exceptions to general theological norms in Scripture. For example, consider Matt. 3:5-6: “Then went out to [St. John the Baptist] Jerusalem and all Judea and all the region about the Jordan, and they were baptized by him.” We know that “all” here does not mean “all” in a strict sense because we know, at least, Herod, Herodias, and her daughter, were exceptions to this verse (See Matt. 14:1-11). They conspired to put St. John to death. Not the best candidates for baptism! Moreover, man of the Pharisees and Sadducees are explicitly said to have “not… been baptized by him” in Luke 7:30.

The bottom line: There are exceptions to Matt. 3:5-6. St. John the Baptist did not baptize everyone in “Jerusalem, Judea and the region around Jordan.” So Mary could be (and is, as we will see below) an exception to I Cor. 15:22-23.

2. There are exceptions to other general norms specifically laid out as true for “all” in Scripture. Hebrews 9:27 declares, “It is appointed for men to die once, and after that comes judgment.” Yet we see exceptions to this norm many places in Scripture by way of resurrections from the dead. Not only do we have Elijah, Elisha, Jesus, St. Peter and St. Paul raising the dead in Scripture, but after Jesus’ Resurrection, “the tombs also were opened, and many bodies of the saints who had fallen asleep were raised, and [came] out of the tombs” (Matt. 27:52-53). These folks obviously did not “die once.” They presumably died at least twice!

Is the woman of Revelation 12 Mary?

The Church acknowledges Scripture to have a polyvalent nature. In other words, there can be many levels of meaning to the various texts of Scripture. So, are there many levels of meaning to Rev. 12? Absolutely! Israel is often depicted as the Lord’s bride in the Old Testament (cf. Song of Solomon, Jer. 3:1, etc.). So there is precedent to refer to Israel as “the woman.” And Jesus was born out of Israel.

Moreover, the Book of Revelation depicts the New Covenant Church as “the bride of Christ” and “the New Jerusalem” (cf. Rev. 21:2). “The woman” of Revelation 12 is also depicted as continuing to beget children to this day and these children are revealed to be all “who keep the commandments of God, and have the testimony of Jesus Christ” (vs. 17). The Church certainly fits this description.

In fact, we argue as Catholics “the woman” to represent the people of God down through the centuries, whether Old Covenant Israel or the New Covenant Church, “the Israel of God” (Gal. 6:16), at least, in one sense.

The first and literal sense

All we have said about “the woman” of Revelation 12 representing the people of God down through the millennia of time does not diminish in any way the first and literal sense of the text as representing Mary. In fact, there are at least four reasons why one cannot escape including Mary when exegeting Revelation 12 and specifically the identity of “the woman.”

1. “The woman” in Rev. 12 “brought forth a man child, who was to rule all nations with an iron rod: and her son was taken up to God, and to his throne.” This child is obviously Jesus. If we begin on the literal level, there is no doubt that Mary is the one who “brought forth” Jesus.

2. Though we could discover many spiritual levels of meaning for the flight of “the woman” in 12:6, 14, Mary and the Holy Family literally fled into Egypt in Matt. 2:13-15 with divine assistance.

3. Mary is referred to prophetically as “woman” in Gen. 3:15, Jer. 31:22, and by Jesus as the same in John 2:4 and 19:26. Especially considering the same apostle, John, wrote the Gospel of John and the book of Revelation, it is no stretch to say St. John would have had Mary in mind when he used the familiar term “the woman” as the descriptor of the Lady of the Apocalypse.

4. There are four main characters in the chapter: “the woman,” the devil, Jesus, and the Archangel Michael. No one denies that the other three mentioned are real persons. It fits the context exegetically to interpret “the woman” as a person (Mary) as well.

How do we know Mary is bodily in heaven?

Some may concede Mary to be the woman of Revelation 12, but the next logical question is: “How does this mean she is in heaven bodily? There are lots of souls in heaven, but they don’t have their bodies.”

It seems clear that “the woman” is depicted as having “the moon under her feet, and on her head a crown” (vs. 1). Elsewhere in Rev. and in other parts of Scripture, saints in heaven are referred to as the “souls of those who had been slain” (Rev. 6:9) or “the spirits of just men made perfect” (Heb. 12:23). Why? Because they do not have bodies! They are disembodied “souls” or “spirits.” But the “woman” of Rev. 12 is portrayed as having a body with a head and feet.

But perhaps even more important than this is the fact that “the Ark of the Covenant” is revealed as being in heaven in Rev. 11:19. This is just one verse prior to the unveiling of “the woman” of Rev. 12:1.

Some may respond at this point: “Who cares if the ‘Ark of the Covenant’ is said to be in heaven?”

This is crucial, because Hebrews 9:4 tells us what was contained within the ark: a portion of manna, the miraculous “bread from heaven” of Old Testament fame, Aaron’s staff, and the Ten Commandments. In fact, it was precisely because of these sacred contents that the ark was so holy, and that is precisely why it is here depicted as having been taken up to heaven.

The question is: Is the Ark of the Covenant depicted as being in heaven a “what” (an Old Testament box made of acacia wood overlain with gold in Exodus 25), or a “who?” I argue it not only to be a “who” but to be the Blessed Virgin Mary for these reasons:

Then God’s temple in heaven was opened, and the ark of his covenant was seen within in his temple; and there were flashes of lightning, loud noises, peals of thunder, an earthquake, and heavy hail.

When St. John views the temple in heaven, he is not viewing the Old Testament temple. He is viewing the true temple, which is Christ’s body. In the same way, St. John is not seeing the Old Covenant ark. He sees the new and true Ark of the Covenant. And remember: this would not just be talking about Mary but Mary’s body! It was Mary’s body that housed the Son of God, the fulfillment of the various types of Christ that were contained in the Old Covenant ark.

The conclusion is inescapable. Where is Mary’s body? In heaven, according to the Book of Revelation!

Some may argue at this point our energy was wasted in asserting Mary to be identified with “the woman” of Revelation 12 because this “woman” is depicted as “travailing” with the pangs of labor in verse 2. Thus, this cannot be the “Catholic” Mary.

1. No matter which interpretation you choose—Israel, the Church, Mary, or all of the above—all interpretations agree: the labor pains of Rev. 12:2 are not literal pains from a child passing through the birth canal. This really should not be a problem at all.

2. From the very beginning of Mary’s calling to be the Mother of the Messiah, she would have most likely known her Son was called to be the “suffering servant” of Isaiah 53, Psalm 22, and Wisdom 2.

Mary’s “labor pains” began at the Annunciation and would continue from the cradle to the cross, where she suffered with her Son as prophesied in Luke 2:34-35 and as painfully fulfilled in John 19. Mary’s deep love for and knowledge of her divine Son brought with it pains far deeper than any physical hurt could ever cause. A body can go numb and cease to feel pain. But you can’t deaden a heart that loves, as long as that heart continues to love. Mary clearly chose to love. She was uniquely present for our Lord, from the Incarnation of Luke 1:37-38, to the birthing of his ministry in John 2, to the cross in John 19, and into eternity in Revelation 12.

If you enjoyed this, there is much more in my new book available by clicking here.