How Can Mary Hear Thousands Simultaneously? 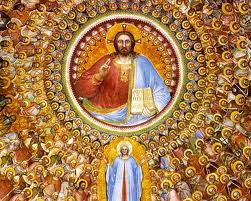 In his 1999 book, Evangelical Answers – A Critique of Current Roman Catholic Apologists, Eric Svendsen claims the Catholic Church makes Mary into not just a god, but the God:

Suppose someone in the United States were to pray to Mary at a certain time during the day. Suppose further that, at exactly that same moment, someone in Europe begins also to pray to Mary… suppose at that same moment hundreds of thousands of devoted Catholics all over the world begin praying the rosary… In order for Mary to hear all those prayers at once she would have to be omniscient (“all-knowing”)—an attribute that is the property of God alone.

The simplest Catholic response would be to first reference Rev. 5:8:

And when [Christ, the lamb] had taken the scroll, the four living creatures and the twenty-four elders fell down before the Lamb, each holding a harp, and with golden bowls full of incense, which are the prayers of the saints…

Catholics simply believe this text of Scripture. These twenty-four elders are human beings in heaven and they are depicted as “each one [having] vials of incense, which are the prayers of the saints” (emphasis added). Each one of them was responding to multiple prayers from multiple people. What does that mean? It means these saints in heaven somehow have the power to do what Eric Svendsen claims to be “the property of God alone.” Obviously, it is not. We would do well to recall the words of Sacred Scripture at this juncture: “With God all things are possible” (cf. Luke 1:37). If we have faith, we will have no problem with believing God’s word over our own feeble and fallible intellects.

Moreover, we also see this same ministry being performed by the angels in Revelation 8:3-4:

And another angel came and stood at the altar with a golden censer; and he was given much incense to mingle with the prayers of the saints from the hand of the angel before God. Then the angel took the censer and filled it with fire from the altar and threw it on the earth; and there were peals of thunder, loud noises, flashes of lightning, and an earthquake.

Not only are the saints and angels depicted as hearing the prayers of multiple people at the same time, but these prayers are then taken to God and they affect change on the earth as symbolized by the “peals of thunder, loud noises, etc.” I once had a Protestant pastor I was debating say to me when I presented this text to him, “There is no evidence that these saints and angels hear and comprehend those prayers. They just take them to God.” Obviously, the language of “being given incense” representing the prayers of the saints is metaphorical. One cannot “grab a hold of prayers” without knowing what they are any more than one can grab a handful of incense. In order for these pure spirits in heaven to “take prayers” to God, they must be intellectually comprehended and then communicated.

And when you think about it, why wouldn’t they? If Jesus is in heaven at the right hand of God and “he always lives to make intercession for [us]” as Hebrews 7:25 says, would not the angels and saints want to do what Jesus does? I John 3:1-2 says if or when we get to heaven, “We will be like him, for we shall see him as he is.” Why would the saints in heaven see Jesus interceding for us on earth and just sit around and watch him without joining in on the prayer? They would want to do what Jesus does and Jesus would want them to do what he does as well. That’s what “following Jesus” is all about!

But we still haven’t answered Svendsen’s main objection. We need to demonstrate the reasonableness of Rev. 5:8. If infinite power is required for the saints and angels in heaven to hear multiple prayers simultaneously, it is true, only God would be up to the task. Even more, God could not communicate this power outside of the godhead because that would be tantamount to creating another infinite God, which is absurd. God alone is the one, true and infinite God by nature and there can be no other (cf. Is. 45:22).

So, would it require infinite power to hear the prayers of, let’s say, one billion people at the same time? The answer is no. One billion is a finite number. So it would not require infinite power. If we take a look at this universe of ours and consider that we are beings on one planet in one solar system amid billions of stars in one galaxy among billions of galaxies, we are a drop in the ocean next to the vastness of space. All the power a saint, like Mary, would need would be enough to hear just these little creatures on this one little blue dot called “earth.” We are not even in the ballpark of “infinite power” here.

I have to give Eric Svendsen credit because in response to my colleague, Patrick Madrid, who made this very same argument that I just made, Eric Svendsen makes a very insightful critique:

But Madrid’s suggestion creates so many consequent theological difficulties that it is difficult to believe he could be satisfied with it. One may as well argue that omniscience is not needed even by God himself since all things that can be known—no matter how many—are nevertheless limited to a finite number.

In spite of Madrid’s assertions to the contrary, one must indeed be omniscient or omnipresent (or both) before he can hear more than one prayer at a time.

When Svendsen says “omniscience is not needed even by God himself,” he betrays a lack of understanding of the Catholic and biblical position on this matter. Apart from a gift of grace, it would be impossible for created, human nature to be able to hear the prayers of millions at once and to be able to respond to them all. In fact, I argue it would be beyond unaided angelic power as well. God alone can do these things by nature and absolutely.

St. Thomas Aquinas answers this question succinctly when he says the ability to perform actions that transcend nature comes from a “created light of glory received into [the] created intellect.” It would require infinite power to “create the light” or the grace given to empower men and angels to act beyond their given natures. Only God can do that. But it does not require infinite power to passively receive that light. As long as what is received is not infinite by nature or does not require infinite power to comprehend or to be able to act upon, it would not be beyond men or angel’s ability to receive. Therefore, we can conclude this “created light” given by God to empower men and angels to be able hear millions of prayers and respond to them simultaneously is reasonable as well as biblical.

If you want much more information on this topic, check out my CD set called “Friends in High Places” available here.

Does Praying to Saints Equal Worshipping the ...