The Church and Capital Punishment 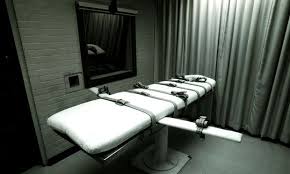 Years ago, my wife and I were at a fundraiser for a candidate who was then running for President of the United States, and I struck up a conversation with a Catholic attorney who does great work for various pro-life causes. I’ll call him John. The conversation had hardly turned from small talk about family and children to pro-life matters when John made the claim, “Anyone who is pro-death penalty cannot make the claim to being pro-life because the two positions are oxymoronic.”

I pointed out to John what too many Catholics simply do not know: The death penalty has always been, and always will be, upheld as a legitimate and potentially just punishment in Catholic Tradition as well as in Scripture.

Genesis 9:6 says, for example, “He who sheds the blood of man, by man shall his blood be shed; for God created man in his own image.”

The Catchism of the Council of Trent teaches under the heading of “The Fifth Commandment:”

Another kind of lawful slaying belongs to the civil authorities, to whom is entrusted power of life and death, by the legal and judicious exercise of which they punish the guilty and protect the innocent. The just use of this power, far from involving the crime of murder, is an act of paramount obedience to this Commandment which prohibits murder. The end of the Commandment is the preservation and security of human life. Now the punishments inflicted by the civil authority, which is the legitimate avenger of crime, naturally tend to this end, since they give security to life by repressing outrage and violence. Hence these words of David: “In the morning I put to death all the wicked of the land, that I might cut off all the workers of iniquity from the city of the Lord.”

Assuming that the guilty party’s identity and responsibility have been fully determined, the traditional teaching of the Church does not exclude recourse to the death penalty, if this is the only possible way of effectively defending human lives against the unjust aggressor.

If, however, non-lethal means are sufficient to defend and protect people’s safety from the aggressor, authority will limit itself to such means, as these are more in keeping with the concrete conditions of the common good and more in conformity to the dignity of the human person.

Today, in fact, as a consequence of the possibilities which the state has for effectively preventing crime, by rendering one who has committed an offense incapable of doing harm – without definitely taking away from him the possibility of redeeming himself – the cases in which the execution of the offender is an absolute necessity “are very rare, if not practically nonexistent.”

This latter statement in quotes, “… rare, if not practically non-existent,” is taken from Pope St. John Paul II’s Encyclical Letter, Evangelium Vitae, paragraph 56. This statement, along with the USCCB’s thought-provoking document on capital punishment of 1980, where the bishops declared their belief that the death penalty ought not to be carried out in the United States in our time, were the documents John used to say a person is not truly pro-life if he is, at the same time, pro-death penalty.

A Matter of Prudence

I pointed out to John that the Church, Pope St. John Paul II, and the American bishops, and now we can add Pope Francis as well, are not making dogmatic statements on the matter of the death penalty; rather, they are making prudential judgments. There is a significant difference between the two.

Catholics are free to debate the issue of when the death penalty should or should not be employed. In fact, then Cardinal Ratzinger, now Pope Emeritus Benedict XVI, when he was Prefect of the Sacred Congregation for the Doctrine of the Faith, declared, in a document called, “Worthiness to Receive Holy Communion: General Principles,” 3:

Not all moral issues have the same weight as abortion and euthanasia. For example, if a Catholic were to be at odds with the Holy Father (John Paul II) on the application of capital punishment or on the decision to wage war, he would not for that reason be considered unworthy to present himself to receive Holy Communion. While the Church exhorts civil authorities to seek peace, not war, and to exercise discretion and mercy in imposing punishment on criminals, it may still be permissible to take up arms to repel an aggressor or to have recourse to capital punishment. There may be a diversity of opinion even among Catholics about waging war and applying the death penalty, but not however with regard to abortion and euthanasia.

So again, the key here, as I said to my friend John, is to understand that capital punishment and the death penalty are not “non-negotiable” matters as abortion and euthanasia are. And we could speak of other “non-negotiables” as well.

Thus, a Catholic who supports the use of the death penalty against those convicted of capital crimes in modern times while opposing the murder of innocents does not somehow forfeit his “pro-life” position.

After what ended up being a very congenial discussion, it struck me how important it is that we never present the question of capital punishment as if there is a moral equivalency between it and, say, abortion, or any of the other “non-negotiables” in our moral theology. Capital punishment can be carried out justly against a murderer who has been justly convicted. Abortion, however, is always and in every situation grave sin and can never be justified in any sense.

The problems with presenting capital punishment as if it is a “non-negotiable” are manifold:

1. It sets up contradictions between Scripture and the teaching of the Church. This can never be.

2. It presents contradictions between Magisterial statements of the Church. This causes confusion among the faithful and can lead to skepticism toward other teachings of the Church.

If you enjoyed this, click here to go deeper in the discussion.

Do the Infancy Narratives Contradict Each Other?

The Greatest Dancer Ever