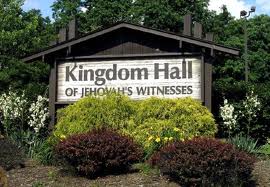 An ex-Jehovah’s Witness, now Catholic, who we at Catholic Answers helped to come to Christ in his Church, gave me some wonderful gifts by way of old books, many of them first edition, published by the Watchtower Bible and Tract Society, the publishing arm of the Jehovah’s Witnesses run by the leaders of their sect. Of note among these great gifts is a first edition copy of The New World Translation of the Christian Greek Scriptures, the official Jehovah’s Witness translation of the New Testament, first published by the Watchtower in 1950.

It is not the translation so much that makes it so valuable, though the translation is certainly important. The New World Translation is, at times, not so much a translation as it is an attempt to force Jehovah’s Witness theology into biblical texts that actually oppose it. But you can get newer editions of the translation that aren’t that much different than the old. The footnotes explicating the texts are where the real value lies in this 1950 edition.

In future blog posts, I will comment on some other examples of these footnotes, but in this post I want to focus on the footnote to John 8:58, one of many New Testament texts that contribute significantly to our understanding of the revelation of Jesus Christ as fully God (of course, Christ is also fully man). And keep in mind, Jehovah’s Witnesses deny Christ’s divinity.

The Text at Hand

Let us first lay out a proper rendering of John 8:58 from the RSVCE, including verses 57 and 59 for a bit of context:

When Jesus responded to “the Jews” saying, “Before Abraham was, I am,” St. John was, no doubt, hearkening back to God’s revelation of the divine name as “I AM WHO AM,” and the shorter “I AM” in Exodus 3:13-15.

In Hebrew, when God first answers Moses’s question as to what his name is, in verse 14, he says, ehyeh asher ehyeh is his name, which translates as “I am that I am.” God then tells Moses, in that same verse, to tell “the sons of Israel I AM has sent me to you.” There, God says his name is more simply ehyeh, or “I AM.” Then, in verse fifteen, he tells them that his name forever will be YHWH, commonly read and spoken as Yahweh, which translates as “I AM THAT I AM,” or “I AM WHO AM,” as St. Jerome translated it. Yahweh, it would seem, would be God’s formal name while the essence of his name is revealed simply as I AM. Metaphysically, this name reveals God to simply be. He has no beginning, no end, no lack of being; He is all perfection. He is existence itself.

It is difficult for us in the 21st century to fathom how utterly blasphemous it would have sounded for Jesus of Nazareth to dare utter the words we cited above from John 8: “Before Abraham was, I AM.” It is no wonder that in verse 59 the Jews picked up stones to kill him. He is essentially claiming the divine name for himself plainly revealing that he was and is God.

Obviously, Jehovah’s Witnesses cannot leave this text as is and maintain their denial of Christ’s divinity. So what do they do? Let me now cite the New World Translation’s rendering of verse 58:

Jesus said to them: “Most truly I say to you, Before Abraham came into existence, I have been.”

In the footnote below, the translators claim because “I am” (Greek, ego eimi) comes after an aorist infinitive clause, it is “properly rendered in the perfect indefinite tense.” Moreover, it declares, “It is not the same as [ho ohn] (ho ohn, meaning “The Being” or “The I Am”) at Exodus 3:14, LXX.”

We should note here that in the Septuagint (LXX, which is a Greek translation of the Hebrew Old Testament translated ca. 250-100 BC), the name God first reveals to Moses in Exodus 3:14 is “ego eimi ho ohn,” which translates as “I am the being.” With this in mind, this latter point in the NWT footnote is truly stunning. A first or second year Greek student knows that ho ohn does not mean “The I AM.” Ho ohn means “the being.” Ego eimi means “I am.” Thus, again, ego eimi ho ohn, translates literally as “I am the being.” Most likely, because the second time God tells Moses to repeat his name to the people of God, the Septuagint has God saying to Moses, “Say this to the sons of Israel, the being (Gr.—ho ohn) has sent you,” instead of what we find in the Hebrew text—I AM—in verse 14, the translator wrongly thought ho ohn could be translated as “the I am.” In fact, the translators of the Septuagint were either using bad manuscripts or just got it wrong here for whatever reason. The Hebrew text reads, “… I AM sent me to you” as we said above. But again, to think ho ohn could be translated as “the I am” reveals a truly remarkable lack of knowledge of Greek by the “translators” of the New World Translation.

I would add here that Herbert W. Smyth says, in his classic Greek Grammar, published by Harvard University Press, there are certain Greek verbs that express “an enduring result, and may be translated by the perfect.” Heiko (I have arrived) is a good example as we find it in I John 5:20, “And we know the Son of God has come…” Has come (Gr.—heikei) is in the present tense, but denotes a perfect sense.

In John 14:9, we find Jesus responding to Philip’s insistence that he “show us the Father,” by saying, “Have I been with you so long, and yet you do not know me?” St. John used eimi for “I” here. The literal translation would be “Am I with you so long…” This is a case of the verb to be in the present tense, but used in a perfect sense.

So, even though we would argue that at best the translators should have known that there is no “perfect indefinite tense in Greek” and that, at best, they could argue for a present for perfect usage here, do the Jehovah’s Witnesses have a point here? Could John 8:58 be another case of a present for perfect? Should we translate it as “before Abraham came into existence, I have been?” The answer is no.

What the Watchtower does not take into account is the particular category of usage into which John 8:58 falls as a result of the context in which it is found. As D.A. Carson points out in his book, Exegetical Fallacies, context and usage are much more important than technical, grammatical rules. He calls these kinds of fallacies “grammatical fallacies.” While there are many possibilities when it comes to the use of words that would fall within the parameters of Greek grammar, the proper understanding of terms comes most often through discovering its actual usage in the sacred text.

Bruce Vauter, C.M., points out in the Jerome Biblical Commentary, “The ‘I am’ formula without the predicate,” as he calls it, or the “I am” without anything following it (Gr.—ego eimi) , is used frequently in John’s Gospel and elsewhere in the New Testament, with crucial antecedents in the Old Testament as well. In Mt. 14:27; Mk. 13:6; 14:62; John 4:26, 6:20, 8:24, 8:28, 18:6 and, of course, John 8:58, as we’ve seen, we find this formula used, but each time it is in the context of either some sort of miraculous intervention where Christ is revealing his divine authority, or in the context of an overt statement declaring his divinity in no uncertain terms as we saw in John 8:58. This does not mean this “formula” cannot have other meanings, but it does establish a context in which we find it often relating to Christ’s identity as more than just a man in the New Testament.

If we couple these examples with the fact that God uses this same “I am” formula in the Old Testament in texts like Exodus 3:14; Dt. 32:39; Is. 43:10; 46:4; 51:12 and more, revealing himself to be the infinite God—the I AM—without beginning and end, all perfection, being itself, etc., Jesus’ usage becomes all the more profound. Again, he is declaring himself to be God.

It is only with this understanding that so many of these above-cited New Testament texts make sense. Jesus uses the divine name just before he miraculously calms a storm, revealing his divinity in Matt. 14:27. He responds to the High Priest using the divine name resulting in the High Priest declaring him to have committed blasphemy in Mark 14:62. We saw the reaction of the Jews wanting to stone him in John 8:58. It was not punishable by death to believe wrongly that human beings could have had a pre-human existence, which is all the “I have been” translation would indicate. In fact, the pre-existence of the human soul was believed by many Jews in the first century. It would make no sense for the Jews to “[take] up stones” if this was all Jesus was saying.

The multiple “I am” passages–Mt. 14:27; Mk. 13:6; 14:62; John 4:26, 6:20, 8:24, 8:28, 18:6–of the New Testament are used to reveal Christ’s divinity just as their antecedent “I am” passages in the Old Testament reveal something of God’s essence as absolute being. The texts themselves, their context, and the reaction of the Jews hearing our Lord’s words make it undeniable that Jesus was here revealing that he was not only true man, but true God as well.

John 6 and the Eucharist