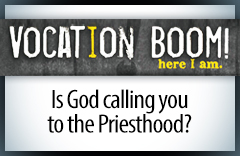 Vocation Boom is the fruit of a vision that began to take shape in the heart of founder Jerry Usher during his six years in formation for the priesthood from 1989-95. It provides to seminarians and others who are discerning a call to the priesthood, resources that will enable them to more clearly hear the voice of God extending to them that invitation. Vocation Boom is committed to utilizing all forms of media and technology to carry out this mission. These include the social media, our award-winning website, a weekly radio show distributed by the EWTN Global Catholic Radio Network, which is aired on nearly 250 AM and FM stations, Sirius Satellite Radio, the Internet and smartphone apps, an upcoming television program on EWTN, which is scheduled to debut in September 2014, on-location events at seminaries and other places of formation, and pilgrimages for priests and seminarians to the Holy Land (the first of which is scheduled for December 2015).

Check out www.vocationboom.com We need more people to answer their calling to the priesthood and religious life. Vocation Boom needs your help!

Is Man Constituted by Two Parts or ...