Are There Ministerial Priests in the New Covenant? 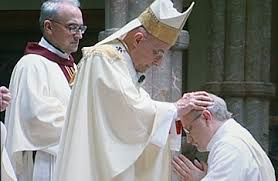 I can’t recount how many times I have been told by various brands of non-Catholics, “The Bible clearly teaches that we only have one priest and that is Jesus Christ, so how can Catholics claim a New Testament priesthood?”

This makes Jesus the surety of a better covenant. The former priests were many in number, because they were prevented by death from continuing in office; but he holds his priesthood permanently, because he continues forever. Consequently he is able for all time to save those who draw near to God through him, since he always lives to make intercession for them (emphasis added).

1. Jesus is our one intercessor. A synonym for intercessor is mediator.

2. The definition of a priest is a mediator between God and men.

3. Most importantly, I Timothy 2:5 says, “For there is one God, and there is one mediator between God and men, the man Christ Jesus.”

Therefore, there can be no New Testament “priesthood” as we see in the Catholic Church. The New Testament, it is said, rejects this notion.

These texts are often followed by I Peter 2:5-9, which tells us:

… like living stones be yourselves built into a spiritual house, to be a holy priesthood, to offer spiritual sacrifices acceptable to God through Jesus Christ… But you are a chosen race, a royal priesthood, a holy nation, God’s own people…

“We are all priests in the New Testament,” is quite often the refrain.

It is almost painful to point out the obvious contradiction here that often comes from the same person and in the same conversation. How can someone claim there can only be “one priest” in the New Covenant based on Heb. 7:22-25 and I Tim. 2:5, Jesus Christ, but then turn right around and claim “all Christians are priests?”

Houston, we have a problem.

The answer is simple. Often, these folks have never been challenged to think about what it is they are actually saying. The fact is, it is not a contradiction to say Christ is our one, unique priest/mediator/intercessor, and yet see Christians playing the role of priest/mediator/intercessor in the New Testament because: 1. That is what the Bible says. 2. Each Christian acts as members of Christ’s body; thus, each is Jesus Christ extended into this world by the power and direction of Christ.

The key to understanding what is obviously and clearly stated in Scripture is to understand the nature of the body of Christ. Christians do not usurp or diminish the priesthood of Christ when they are referred to as priests; they participate in that unique priesthood. So intimate is the union of the baptized with Christ that St. Paul describes this mystical union as a body (cf. I Cor. 12:12-27, Rom. 12:5) with Christ as its head (cf. Eph. 1:22-23). What can be attributed to a hand in the body does not somehow take away from the head or the body as a whole.

It is obvious Heb. 7:22-25 and I Tim. 2:5 are not saying Christians cannot act as mediators or intercessors in any sense. In I Tim. 2:1-4, St. Paul says, “First of all, then, I urge that supplications, prayers, intercessions, and thanksgivings be made for all men, for kings and all who are in high positions… This is good and acceptable in the sight of God our savior, who desires all men to be saved…”

Then, in I Tim. 5:7, St. Paul goes on to say, “For this I was appointed a preacher and an apostle.” What is an apostle but “one sent” with the authority of the one who sent him. That is a mediator, folks!

The text urges Christians to act as mediators or intercessors for the salvation of souls because Christ is the one mediator of salvation to the world. And for this reason, St. Paul was sent to act as a mediator of Christ’s love to the world (in particular, to the gentiles).

The bottom line here: We must understand that Christians—and St. Paul—can only accomplish this because they are in the one true mediator and act as members of his body.

But What About Ministerial Priests?

After admitting the truth of the above, the next question is normally worded something like this:

Even if we were to accept the notion of Christians being priests as you say, and accept your interpretation of I Tim. 2:5 and Heb. 7:22-25, this in no way shows that there is a distinct ordained priesthood. I Pet. 2 teaches all Christians are priests. And, in fact, the ordained ministers of the New Covenant are called apostles (cf. Eph. 4:11), presbyters (cf. Js. 5:14), and bishops (cf. Acts 1:20, I Tim. 3:1). They are not called priests, which is hiereus in Greek.

We Will Do So in Three Points

2. As far as the term “priest” is concerned: it is not surprising that the Christians of the first century would not use the term “priest” (Gr. hiereus) in describing their ministers. This was the same term being used by the more numerous Jewish (cf. Lk. 1:8-9) and even pagan (cf. Acts 14:13) priests. Christians most likely used language to distinguish their priests from the Jewish and pagan priests of their day.

3. One of the largest obstacles for many to accepting a New Testament priesthood is the idea of needing any mediation whatsoever in the New Covenant. “Isn’t this the whole point of the New Covenant?” they will ask. “We don’t have to go to a mediator on earth anymore. We can go directly to God through Christ.”

In one sense, this is true. We can go directly to God through Jesus Christ in offering our prayers and sacrifices in union with Him. But this is not an either/or proposition. We do not either go to God or go to his representatives on this earth when we have needs. The Catholic Church, and the Bible I might add, says we do both. For example, Phil. 4:6-7 says:

Have no anxiety about anything, but in everything by prayer and supplication with thanksgiving let your requests be made known to God. And the peace of God, which passes all understanding, will keep your hearts and your minds in Christ Jesus.

Here we see St. Paul encouraging all Christians to exercise their universal, “royal priesthood” before God. However, analogous to what we saw in the Old Testament, we also have a special group of men called by Christ to a specific priestly ministry within the body of Christ in the New Testament. In fact, each of the three ministers I mentioned above—apostles, presbyters (or “elders”), and bishops—is clearly presented as priestly in nature in the New Testament.

In Scripture, we see our Lord definitively choosing and sending apostles to act as mediators between God and men (in Christ, of course). This, again, is the definition of a priest. For example, after the resurrection, our Lord appears to the apostles in the upper room and says to them:

Here, Jesus communicates the power to forgive and retain sins to the apostles. This is clearly a priestly ministry (see also Lev. 19:21-22). In II Cor. 2:10, St. Paul says to the Corinthians:

…if I have pardoned anything for your sakes have I done it in the person of Christ (Douay Rheims).

St. Paul evidently heard confessions in Corinth carrying out this priestly commission of the apostle.

Jesus not only gives the authority to forgive sins to the apostles, but he gives them divine, infallible authority to proclaim the gospel as well. “He who receives you receives me, and he who receives me receives him who sent me” (Matt. 10:40). In II Cor. 2:17 we see St. Paul carrying out this priestly ministry. “For we are not as many, adulterating the word of God; but with sincerity, as from God, before God, in Christ we speak” (Douay Rheims).

Therefore, if anyone is in Christ, he is a new creation; the old has passed away, behold, the new has come. All this is from God, who through Christ reconciled us to himself and gave us the ministry of reconciliation.

If Jesus Christ is a priest–and he is–then so are the apostles.

According to Scripture and Tradition, bishops are successors of the apostles. In Acts 1:20, for example, when the apostles were choosing a replacement for Judas, the text reads, “… And his bishopric (Gr. episkopee) let another man take.” Thus, the “bishopric,” by nature, carries on the apostolic ministry in their same priestly function.

These too are most definitely seen as priests. James 5:14 puts it quite plainly:

Is any among you sick? Let him call for the elders (Gr. presbyteroi) of the church, and let them pray over him, anointing him with oil in the name of the Lord; and the prayer of faith will save the sick man, and the Lord will raise him up; and if he has committed sins, he will be forgiven.

Notice, the Scripture does not say we should go to just anyone if we’re sick because we are all priests. It singles out the presbyters and once again they are seen acting as mediators in the forgiveness of sins and healing.

St. Paul tells us the presbyter has been given the ministry of reconciliation just as the apostles and bishops, in II Cor. 5:20:

So we are ambassadors (Gr. presbeuomen) for Christ, God making his appeal through us. We beseech you on behalf of Christ, be reconciled to God.

I know from my own experience as a former Protestant that the word “priest” brought with it all sorts of anti-Catholic bias in my mind. What I came to discover, however, is New Testament ministers are, in fact, priests, even though the noun is not found referring to them. Whether you call these New Covenant ministers apostles, bishops, or presbyters, their function is clearly priestly. A great example of this can be found in how St. Paul refers to his own apostolic ministry as a “priestly service.”

… because of the grace given me by God to be a minister of Christ Jesus to the Gentiles in the priestly service of the gospel of God… (Romans 15:15b-16a)

I think people can easily fall into the same trap of those who would reject the Trinity because the word “Trinity” is not found in Scripture. The reality of the Trinity is there. The Church uses this word to define the mystery of three divine persons existing in one essence, or nature. So it is with the priesthood. The noun, hiereus, is not there. But the fact that apostles, bishops, and elders function as priests is very clear.

Attempts to deny the priestly character of the above-mentioned texts are always, shall we say, interesting. One example of this is found in the attempt to interpret away Jesus’ clear words imparting the power to forgive sins to the apostles in John 20:21-23. Many will claim, “The perfect tense, passive voice, of the verb ‘to forgive’ makes clear that when Jesus said, ‘If you forgive the sins of any, they are forgiven,’ it actually means whoever sins you forgive have already been forgiven. Not through any instrumentality of the apostle, but by God.”

While it is true perfect passive forms of the verbs both “to forgive” and “to retain” are employed in the text, this same text plainly tells us when the sins were “already forgiven.” When “you” (the apostles) forgive them!

The Catholic Church is not saying the apostles are doing this by some magical powers or by their own power. Jesus “breathed on them” and gave them the power of the Holy Spirit to forgive sins. But the fact is the apostles are the revealed instruments of God’s forgiveness. If this is not a priest, then what is a priest?

There are many more texts of Scripture we could use to demonstrate a New Covenant ministerial priesthood. But I suppose I could sum it up with the old saying, “If it walks like a duck, quacks like a duck… it’s a duck.”