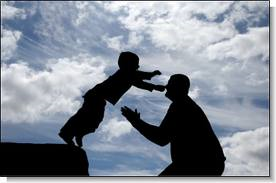 The other day I received a rather lengthy email from a fellow responding to a chapter in my book, Nuts and Bolts – A Practical How-To Guide for Explaining and Defending the Catholic Faith, specifically responding to my defense of calling priests “father.”

Score One Up For the Protestants

I have answered this question hundreds of times over the years, but this fellow’s critique caught my attention first of all because he used my own style of argumentation against me. I liked that. “Matthew 23:9,” he reminded me, “says, ‘Call no man your father on earth, for you have one Father, who is in heaven.’ What would Jesus have to say to you, Tim, to get you to believe you can’t call your priest ‘father,’ other than by saying, ‘Call no man your father on earth?'”

I have to believe this fellow has heard me speak before because I have often (too often?) used a similar line, “What else would Jesus have to say…” to argue in favor of various Catholic doctrines. In fact, I used that very approach in my debate with Dr. Peter Barnes on the Eucharist in Sydney, Australia, when we were discussing John 6:53.

Cudos to my interlocutor at this point, but that would be, quite frankly, about the only round he had in his magazine.

In Nuts and Bolts, I point out the fact that notwithstanding Jesus’ words in Matthew 23, St. Paul calls people “on the earth” father in Ephesians 6:2-4:

“Honor your father and mother” (this is the first commandment with a promise), “that it may be well with you and that you may live long on the earth.” Fathers, do not provoke your children to anger, but bring them up in the discipline and instruction of the Lord.

Is this a contradiction?

Many will respond at this point and claim Jesus is not just condemning calling anyone father; rather, he is condemning calling religious leaders “father.” As I explain in my book, this is easily dismissed when we consider the words of our Lord from Luke 16:24:

And he (the rich man) called out, “Father Abraham, have mercy upon me, and send Lazarus to dip the end of his finger in water and cool my tongue; for I am in anguish in this flame.”

At this point, my new friend argued something slightly different from what I’ve heard before. He said words to the effect of: “The key here is found in the words ‘on the earth.’ Abraham was not on earth. So Jesus was not simply condemning giving the ‘title’ of ‘father’ to men, but giving it to religious leaders who are on earth. And that is precisely what Catholics do!”

The first problem here is Jesus did not say “give no spiritual leader on earth the title father.” He simply said, “Call no man on earth your father.” More on that in a moment. For now, let’s follow the argument. So now our Protestant friend is saying it is okay to call our dads “father” because they are not “spiritual leaders” in the Church. We can also call our spiritual forefathers like Abraham or Jacob (John 4:12) father because they are no longer “on earth.”

Sounds okay so far, but here’s the problem. In I John 2:13-14, St. John refers to the leaders of the church in Ephesus to whom he is most likely writing as “fathers” twice. And notice he gives them the title “father.”

In Acts 7:1-2, St. Stephen, under the inspiration of the Holy Spirit, calls both Abraham and the elders of Jerusalem “father” in the same breath:

And the high priest said, “Is this so?” And Stephen said: “Brethren and fathers, hear me. The God of glory appeared to our father Abraham…”

I do not write this to make you ashamed, but to admonish you as my beloved children. For though you have countless guides in Christ, you do not have many fathers. For I became your father in Christ Jesus through the gospel.

What Does the Bible Actually Say?

What we need to do is get back to Matthew 23:9 and let the surrounding verses clarify things for us:

We have “one teacher,” and yet, many are called “teacher” in the New Testament (see James 3:1; Ephesians 4:11, etc.). We have “one master,” or leader, and yet, we have many “leaders” in the body of Christ to whom we are called to submit (Hebrews 13:17 uses the same Greek root for “leader” when it says, “Obey your leaders and submit to them…”).

Ultimately, the key to understanding all of these seemingly contradictory texts is found in a proper understanding of the nature of the Body of Christ.

I am going to call upon the Douay-Rheims (Confraternity Edition) translation of Ephesians 3:14-15 to help me out here:

For this cause I bow my knees to the Father (Gr. – Patera – “Father”) of our Lord Jesus Christ, Of whom all paternity (Gr. – patria – “fatherhood”) in heaven and earth is named.

In his famous Four Discourses Against the Arians, Discourse 1, Para. 23, St. Athanasius makes this very point explaining how Ephesians 3:14-15 employs a play on words when it says, “For this cause I bow my knees to the father of lights…” Father here is patera, in Greek. It then says, “… of whom all paternity (fatherhood, paternia in Greek) … is named,” or, “is derived.” The play on words brings out the truth that true paternia (fatherhood) participates in our one, true Pater in heaven.

The context of Matthew 23 emphasizes the sin of pride among the scribes and Pharisees. They loved to be called “teacher”, “father”, or “Rabbi,” but their pride pointed men to themselves rather than to God the Father from whom they received true fatherhood and in whom their fatherhood subsisted. Outside of God the Father, there are no fathers at all in the true sense of the term. But in God, we have all sorts of true “fathers.”

Moreover, we must recall that Roman Caesars all the way back to Caesar Augustus, thirty years before our Lord would utter these words, demanded divine adoration from citizens of the empire. Many early Christians were martyred not simply for refusing to adore that pantheon of the gods, but for refusing to adore (worship) the emperor. And guess what one of the emperor’s titles was? “Father!” He was the “father” of the empire and the citizens were his children who had to worship him as a god.

This brings a whole knew light to Jesus’ words, “Call no man father…”

Ultimately, Jesus is condemning the usurpation of the fatherhood of God in Matthew 23:9, not the proper participation in that fatherhood.