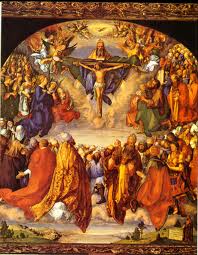 In his book, Answers to Catholic Claims, A Discussion of Biblical Authority, Protestant Apologist James White claims praying to saints is contrary to Scripture:

Biblical texts like Deut. 18:10-11 and Isaiah 19:3—each of which condemns necromancy—are employed to say “communication with the dead” is condemned absolutely.

Actually, what is being condemned in these texts from Deuteronomy and Isaiah is conjuring up the dead through wizards and mediums, not praying to saints. The Church has always condemned this that is commonly called necromancy. Mediums attempt to conjure up spirits and manipulate the spiritual realm at will. This is categorically different from Christians asking for the intercession of their brothers and sisters in Christ. We do not “conjure up” or manipulate anything or anyone. True prayer—whether to God or the angels and saints—changes the pray-er, not the pray-ee.

If one says recklessly as Mr. White said, “… there is to be no communication between the living and the dead,” where does this leave Jesus? He is clearly guilty according to Luke 9:29-31:

And as [Jesus] was praying, the appearance of his countenance was altered, and his raiment became dazzling white. And behold, two men talked with him, Moses and Elijah, who appeared in glory and spoke of his departure, which he was to accomplish at Jerusalem.

According to Deuteronomy 34:5, Moses was dead. And yet Jesus was communicating with him and Elijah about the most important event in human history—the redemption. Obviously, Jesus does not agree with Mr. White.

There is another point to White’s argument that requires a deeper level of response. Notice, he said, “The only communication with spirit beings that originates with man that is allowed in Scripture is that of prayer to God and He alone.” This point taken alone would not exclude communicating with the dead in any context. It would only exclude such communication if contact originates from the earth dweller.

In one sense, it seems Mr. White, as well as our Protestant friends he represents by his statement, is stuck in an Old Testament mindset. It is true that we do not see Old Covenant faithful initiating prayer to the dearly departed, but this is to be expected because the faithful dead before Christ and the beatific vision afforded by him would not have had the power to either hear or respond to those prayers. Moreover, the Old Covenant People of God did not have the developed understanding of the after-life that only came with the Revelation of Christ.

Jesus Christ introduces a radical development the Old Covenant saints could not have imagined when he clearly initiates the communication with the faithful departed unlike anything we saw in the Old Testament. I say “clearly” because even Protestant Apologist Eric Svendsen seems to see it, though I’m not sure how cognizant he was of the rammifications of this statement he made about the Transfiguration in his book, Evangelical Answers:

If Jesus “choreographed” it, then he initiated it. Some may say, “Well, he’s God, so he can do that.” Yes, he is. But he is also fully man and we are called to imitate him. If Jesus initiated communication with the dead, there is no reason to believe followers of Jesus cannot do the same. This is precisely what we mean as Catholics when we say we “pray to the saints.”

THE BIBLE SAYS SO

The New Testament presents to us very plain examples of the faithful on earth initiating communication with the saints in heaven. First, we have Hebrews 11-12. Chapter 11 gives us what I call the “hall of faith” wherein the lives of many of the Old Testament saints are recounted. Then, the inspired author encourages these to whom he referred earlier as a people who were being persecuted for their faith (10:32-35), to consider that they are “surrounded by so great a cloud of witnesses,” encouraging them to “run the race” of faith set before them. Then, beginning in 12:18, he encourages these New Covenant faithful by reminding them that their covenant—the New Covenant—is far superior to the Old:

For you have not come to what may be touched, a blazing fire … darkness … gloom … and the sound of a trumpet, and a voice whose words made the hearers entreat that no further messages be spoken to them…

Notice, in the Old Covenant the faithful approached God alone and with trepidation. But in the New Covenant, the faithful have experienced a radical change for the better. “But you have come to … and to … and to … and to.” In the same way we can initiate prayer and in so doing “come to” God and Jesus, we can also “come to” the angels and “the spirits of just men made perfect.” Those would be the saints in heaven. In the fellowship of the saints, we have the aid and encouragement of the whole family of God.

The Book of Revelation gives us an even better description of this communication between heaven and earth:

The twenty-four elders fell down before the Lamb, each holding a harp, and with golden bowls full of incense, which are the prayers of the saints … the elders fell down and worshipped (5:8-14).

These “elders” are offering the prayers of the faithful symbolized by incense filtering upward from the earth to heaven. And because they are seen receiving these prayers, we can reasonably conclude they were both directed to these saints in heaven and that they were initiated by the faithful living on earth. We also see this same phenomenon being performed by the angels in Revelation 8:3-4:

And another angel came and stood at the altar with a golden censer; and he was given much incense to mingle with the prayers of the saints from the hand of the angel before God.

And these prayers offered to God through the mediation of the angels are answered as symbolized by “thunder” and “lightning” that are then cast upon the earth through those prayers:

Then the angel took the censer and filled it with fire from the altar and threw it on the earth; and there were peals of thunder, loud noises, flashes of lightning, and an earthquake.

The bottom line is this: Both the faithful on earth and our brothers and sisters in heaven (and let’s not forget our “cousins,” the angels) are all acting just as Catholics would expect. Believers on earth are initiating prayers which the saints and angels in heaven are receiving. Is this the necromancy condemned in Deuteronomy and Isaiah? Absolutely not! This is New Testament Christianity.

How Can Mary Hear Thousands Simultaneously?