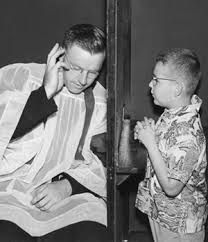 I, I am He who blots out your transgressions for my own sake, and I will not remember your sins.

Bless the Lord, O my soul, and forget not all his benefits, who forgives all your iniquity, who heals all your diseases…

Many will use these verses against the idea of confession to a priest. God forgiving sins, they will claim, precludes the possibility of there being a priest who forgives sins. Further, Hebrews 3:1 and 7:22-27 tell us Jesus is, “the… high priest of our confession” and that there are not “many priests,” but one in the New Testament—Jesus Christ. Moreover, if Jesus is the “one mediator between God and men” (I Tim. 2:5), how can Catholics reasonably claim priests act in the role of mediator in the Sacrament of Confession?

BEGINNING WITH THE OLD

The Catholic Church acknowledges what Scripture unequivocally declares: it is God who forgives our sins. But that is not the end of the story. Leviticus 19:20-22 is equally unequivocal:

Apparently, a priest being used as God’s instrument of forgiveness did not somehow take away from the fact that it was God who did the forgiving. God was the first cause of the forgiveness; the priest was the secondary, or instrumental cause. Thus, God being the forgiver of sins in Isaiah 43:25 and Psalm 103:3 in no way eliminates the possibility of there being a ministerial priesthood established by God to communicate his forgiveness.

OUT WITH THE OLD

IN WITH THE NEW

Just as God empowered his priests to be instruments of forgiveness in the Old Testament, the God/man Jesus Christ delegated authority to his New Testament ministers to act as mediators of reconciliation as well. Jesus made this remarkably clear in John 20:21-23:

Having been raised from the dead, our Lord was here commissioning his apostles to carry on with his work just before he was to ascend to heaven. “As the Father has sent me, even so I send you.” What did the Father send Jesus to do? All Christians agree he sent Christ to be the one true mediator between God and men. As such, Christ was to infallibly proclaim the Gospel (cf. Luke 4:16-21), reign supreme as King of kings and Lord of lords (cf. Rev. 19:16); and especially, he was to redeem the world through the forgiveness of sins (cf. I Peter 2:21-25, Mark 2:5-10).

The New Testament makes very clear that Christ sent the apostles and their successors to carry on this same mission. To proclaim the gospel with the authority of Christ (cf. Matthew 28:18-20), to govern the Church in His stead (cf. Luke 22:29-30), and to sanctify her through the sacraments, especially the Eucharist (cf. John 6:54, I Cor. 11:24-29) and for our purpose here, Confession.

John 20:22-23 is nothing more than Jesus emphasizing one essential aspect of the priestly ministry of the apostles: To Forgive men’s sins in the person of Christ— “Whose sins you forgive, they are forgiven, whose sins you retain are retained.” Moreover, auricular confession is strongly implied here. The only way the apostles could either forgive or retain sins is by first hearing those sins confessed, and then making a judgment whether or not the penitent should be absolved.

TO FORGIVE OR TO PROCLAIM?

Many Fundamentalists claim John 20:23 must be viewed as Christ simply repeating “the great commission” of Matthew 28:19 and Luke 24:47 using different words that mean the same thing:

Go therefore and make disciples of all nations, baptizing them in the name of the Father and of the Son and of the Holy Spirit.

Mr. Zin’s claim is that John 20:23 is not saying the apostles would forgive sins; rather, that they would merely proclaim the forgiveness of sins. The only problem with this theory is it runs head-on into the text of John 20. “If you forgive the sins of any… if you retain the sins of any.” The text cannot say it any clearer: this is more than a mere proclamation of the forgiveness of sins—this “commission” of the Lord communicates the power to actually forgive the sins themselves.

The next question for many upon seeing the plain words of St. John is, “Why don’t we hear any more about Confession to a priest in the rest of the New Testament?” The fact is: we don’t need to. How many times does God have to tell us something before we’ll believe it? He only gave us the proper form for baptism once (Matt. 28:19), and yet all Christians accept this teaching.

But be that as it may, there are multiple texts that deal with Confession and the forgiveness of sins through the New Covenant minister. I will cite just a few of them:

Many may respond to this text by quoting modern Bible translations, e.g., the RSVCE:

St. Paul, it is argued, is simply forgiving someone in the way any layperson can forgive someone for wrongs committed against him. The Greek word—prosopon—can be translated either way. And I should note here that good Catholics will argue this point as well. This is an understandable and valid objection. However, I do not concur with it for four reasons:

1. Not only the Douay-Rheims, but the King James Version of the Bible—which no one would accuse of being a Catholic translation—translates prosopon as “person.”

2. The early Christians, who spoke and wrote in Koine Greek, at the Councils of Ephesus (AD 431) and Chalcedon (AD 451), used prosopon to refer to the “person” of Jesus Christ.

3. Even if one translates the text as St. Paul pardoning “in the presence of Christ,” the context still seems to indicate that he forgave the sins of others. And notice: St. Paul specifically said he was not forgiving anyone for offenses committed against him (see II Cor. 2:5). Any Christian can and must do this. He said he did the forgiving “for [the Corinthian’s] sakes” and “in the person (or presence) of Christ.” The context seems to indicate he is forgiving sins that do not involve him personally.

Is any one among you sick? Let him call for the elders of the church, and let them pray over him, anointing him with oil in the name of the Lord; and the prayer of faith will save the sick man, and the Lord will raise him up; and if he has committed sins, he will be forgiven.  Therefore confess your sins to one another, and pray for one another, that you may be healed. The prayer of a righteous man has great power in its effects. Elijah was a man of like nature with ourselves and he prayed fervently that it might not rain… and… it did not rain…

When it comes to one “suffering;” St. James says, “Let him pray.” “Is any cheerful? Let him sing praise.” But when it comes to sickness and personal sins, he tells his readers they must go to the “elders”—not just anyone—in order to receive this “anointing” and the forgiveness of sins.

The context seems to disagree with this interpretation for two main reasons:

1. St. James had just told us to go to the presbyter in verse 14 for healing and the forgiveness of sins. Then, verse 16 begins with the word therefore—a conjunction that would seem to connect verse 16 back to verses 14 and 15. The context seems to point to the “elder” as the one to whom we confess our sins.

2. Ephesians 5:21 employs this same phrase. “Be subject to one another out of reverence for Christ.” But the context limits the meaning of “to one another” specifically to a man and wife—not just anyone. Similarly, the context of James 5 would seem to limit the confession of faults “to one another” to the specific relationship between “anyone” and the “elder” or “priest” (Gr.—presbuteros).

ONE PRIEST OR MANY?

A major obstacle to Confession for many Protestants (me included when I was Protestant) is that it presupposes a priesthood. As I said above, Jesus is referred to in Scripture as “the apostle and high priest of our confession.” The former priests were many in number, as Hebrews 7:23 says, now we have one priest—Jesus Christ. The question is: how does the idea of priests and confession fit in here? Is there one priest or are there many?

… and like living stones be yourselves built into a spiritual house, to be a holy priesthood, to offer spiritual sacrifices acceptable to God through Jesus Christ… But you are a chosen race, a royal priesthood, a holy nation, God’s own people…

If Jesus is the one and only priest in the New Testament in a strict sense, then we have a contradiction in Sacred Scripture. This, of course, is absurd.  I Peter plainly teaches all believers to be members of a holy priesthood. Priest/believers do not take away from Christ’s unique priesthood, rather, as members of his body they establish it on earth.

If one understands the very Catholic and very biblical notion of participatio, these problematic texts and others become relatively easy to understand. Yes, Jesus Christ is the “one mediator between God and men” just as I Tim. 2:5 says. The Bible is clear. Yet, Christians are also called to be mediators in Christ. When we intercede for one another or share the Gospel with someone, we act as mediators of God’s love and grace in the one true mediator, Christ Jesus, via the gift of participatio in Christ, the sole mediator between God and men (see I Timothy 2:1-7, I Timothy 4:16, Romans 10:9-14). All Christians, in some sense, can say with St.   Paul, “…it is no longer I who live, but Christ who lives in me…” (Gal. 2:20)

In an analogous way, we have a universal “Royal Priesthood” in the New Testament, but we also have an ordained clergy who have priestly authority given to them by Christ to carry out his ministry of reconciliation as we have seen.

A final couple of texts we will consider are Matt. 16:19 and 18:18. Specifically, we’ll examine the words of Christ to Peter and the apostles: “Whatever you bind on earth shall be bound in heaven, and whatever you loose on earth shall be loosed in heaven.” As CCC 553 says, Christ here communicated not only authority “to pronounce doctrinal judgments, and to make disciplinary decisions in the Church,” but also “the authority to absolve sins” to the apostles.

These words are unsettling, even disturbing, to many. And understandably so. How could God give such authority to men? And yet he does. Jesus Christ, who alone has the power to open and shut heaven to men, clearly communicated this authority to the apostles and their successors. This is what the forgiveness of sins is all about: to reconcile men and women with their heavenly Father. CCC 1445 puts it succinctly:

Did the Catholic Church Remove One of ...

An Amazing Apostolic Work – Not Mine!