How Can the Church Teach Angels? 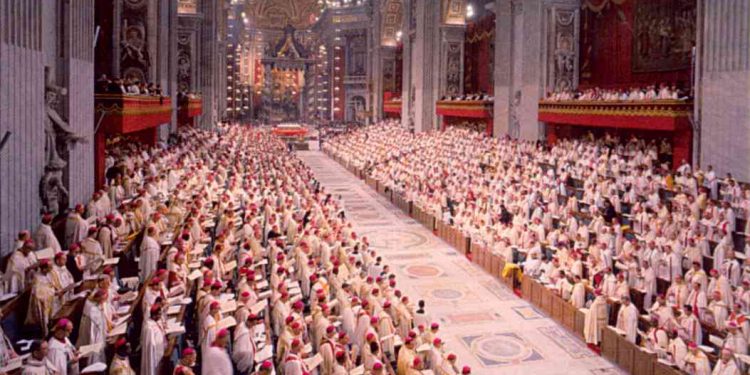 I have come in my Father’s name, and you do not receive me; if another comes in his own name, him you will receive.

With the advent of Protestantism and the confusion that followed, and that continues to this day, Christians, outside of the Catholic Church, have, at best, an incomplete understanding of the power of these words. When Jesus says, “I come in my father’s name,” he reveals the nature of the authority he possesses from God, the Father.

We use this phrase—at least, the “in the name of” part—similarly in modern parlance in law enforcement when a police officer may say: “Stop in the name of the law!” In this context the idea of “in the name of” meaning “by the authority of” comes across clearly. But because we have thousands of different religious sects today all speaking “in the name of Jesus,” this phrase has lost some of its punch, so to speak, in modern times.

But make no mistake about it: What Jesus was saying in John 5:43 is this: He comes “in the name of the Father,” which means he speaks with the final and infallible authority of his Father. He leaves no back door open. No wiggle room. If you reject him, or his teaching, you reject the Father! That is the kind of authority Jesus is revealed to have received from his Father in Scripture.

What I find fascinating in speaking with non-Catholics about this is almost all of them agree with a Catholic understanding here when it comes to the authority of Jesus. But here is what they almost universally miss: Just about every time the New Testament reveals the radical nature of Christ’s authority, you will find in close proximity Christ then giving a similar authority to the Church.

… All authority in heaven and on earth has been given to me. Go therefore and make disciples of all nations, baptizing them in the name of the Father and of the Son and of the Holy Spirit, teaching them to observe all that I have commanded you; and lo, I am with you always, to the close of the age (the implication is go with my authority).

Right after Jesus says in verse 2, “Thou (God, the Father) hast given him (Christ) power over all flesh…” he then says, “For I have given them the words which thou hast given me…”

After saying, “As my Father has appointed a kingdom for me,” he then immediately says, “…so do I appoint for you, that you may eat and drink at my table in my kingdom, and sit on thrones judging the twelve tribes of Israel.”

Jesus said to them (the apostles) again, “Peace be with you. As the Father has sent me, even so I send you.” And when he had said this, he breathed on them, and said to them, “Receive the Holy Spirit…”

And finally, when Jesus speaks of himself speaking with the authority of the Father or “in the name of the Father” in John 5:43, he then prophesies that after the coming of the power of the Holy Spirit, “The hour is coming when I shall no longer speak to you in figures but tell you plainly of the Father. In that day you will ask in my name…”

Further, we see explicit references in Scripture to the authority of the Church being the final authority given by God to the world.

If your brother sins against you, go and tell him his fault, between you and him alone. If he listens to you, you have gained your brother. But if he does not listen, take one or two others along with you, that every word may be confirmed by the evidence of two or three witnesses. If he refuses to listen to them, tell it to the church; and if he refuses to listen even to the church, let him be to you as a Gentile and a tax collector. Truly, I say to you, whatever you bind on earth shall be bound in heaven, and whatever you loose on earth shall be loosed in heaven.

I hope to come to you soon, but I am writing these instructions to you so that, if I am delayed, you may know how one ought to behave in the household of God, which is the church of the living God, the pillar and bulwark (foundation) of the truth.

Notice, this last text is given in the context of St. Paul describing some of the offices of the Church; namely, the bishop and the deacon (i.e. earlier in chapter 3).

St. Paul’s Letter to the Ephesians

The above represent very plain texts. And there are many more we could consider. But for our purpose here, consider St. Paul’s letter to the Ephesians. In chapter 1, St. Paul says plainly that the Church is the fullness of Christ in the world today; thus, to reject the Church is to reject Christ:

[God] raised [Christ] from the dead and made him sit at his right hand in the heavenly places, far above all rule and authority and power and dominion, and above every name that is named, not only in this age but also in that which is to come; and he has put all things under his feet and has made him the head over all things for the church, which is his body, the fullness of him who fills all in all.

In chapter 2, St. Paul tells us the Church is the foundation of our faith (specifically, it says “the apostles and prophets” are the foundation, with Jesus Christ “being the cornerstone”), similar to what he said in I Tim. 3:15:

So then you are no longer strangers and sojourners, but you are fellow citizens with the saints and members of the household of God, built upon the foundation of the apostles and prophets, Christ Jesus himself being the cornerstone.

In chapter 3, St. Paul speaks in the loftiest terms of the nature of the teaching authority of the Church:

To me… this grace was given, to preach to the Gentiles the unsearchable riches of Christ, and to make all men see what is the plan of the mystery hidden for ages in God who created all things; that through the church the manifold wisdom of God might now be made known to the principalities and powers in the heavenly places.

St. Thomas Aquinas speculates as to the truth behind this text in his commentary on Ephesians:

The means through which the manifold wisdom of God is made known to [the angels] is designated by his saying “through the church.”

St. Thomas then explains that the angels are far superior to men on earth, when it comes to knowledge, as are the saints in heaven, I would add, through the beatific knowledge that they possess. However, he explains, it is because of the fact that the Church is the instrument of God that her certain teachings have God as their first principle; hence, the Church can truly be said to “teach angels.” He goes on:

Therefore, it must be asserted that the angels are instructed through the church, that is, through the apostolic preaching… in such a way that they are not taught by the apostles, but in them…

… angels know natural things in two ways. They know them in the Word… and they know them in their own proper natures… Further, there exist certain intelligible patterns [operative in] the mysteries of grace which transcend the whole of creation. These intelligible patterns are not impressed on the angelic minds (that would be through the beatific vision) but are hidden in God alone. Thus, the angels do not grasp them in themselves, nor even in God, but only as they unfold in events [which the mysteries] effect.

To put it simply, angels know all they can know of God and their own natures through their perfect natures, the gift of grace, and the beatific vision. So, how could they possibly learn anything? They can learn because when it comes to how God’s grace is going to work in the world of humans, a world alien to them, the angels can and do learn. But as St. Thomas says, this “learning” does not come through the inferior human nature; rather, it comes through the divine gift of God operating in the Church. As St. Paul said in Ephesians 3:10, “through the church, the manifold wisdom of God is made known to the [angels].”

Think about it, folks. If the Church teaches angels who have the beatific vision, how much more do we puny humans need to heed the authority of the Church! Imagine the scene, say, at Vatican II. The bishops of the world were not the only ones gathered for the 21st Ecumenical Council. The angels of God were gathered as well, saying, “What are they going to say next?”

St. Paul then guarantees us (no matter what our Mormon friends may say, who claim “the great apostasy!”) that this Church he is describing will exist “in every generation world without end” in Eph. 3:21.

He then tells us even further that this Church would be characterized by its unity: It would teach:

And it would be hierarchical:

Therefore it is said, “When he ascended on high he led a host of captives, and he gave gifts to men.”… And his gifts were that some should be apostles, some prophets, some evangelists, some pastors and teachers, for the equipment of the saints, for the work of ministry, for building up the body of Christ, until we all attain to the unity of the faith and of the knowledge of the Son of God (Eph. 4:8, 11-13).

So why did God give us this glorious Church that possesses the authority of Jesus Christ?

So that we may no longer be children, tossed to and fro and carried about with every wind of doctrine… (Eph. 4:14)

The history of Protestantism is one of “children, tossed to and fro and carried about with every wind of doctrine.”

You Must Come to This Conference!